Kids Encyclopedia Facts
Not to be confused with Chest Springs, Pennsylvania. 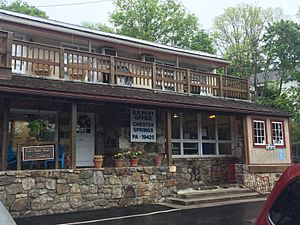 The Historic Yellow Springs Village is located in Chester Springs. The community includes historic churches, established in the 1770s by German Reformed and Lutheran members. These include two facilities on Clover Mill Road: St. Peter's United Church of Christ, whose current building was constructed in 1835, had its first worship place built by its early German Reformed congregation in 1772. St. Peter's Evangelical Lutheran Church was planted by Heinrich Melchior Muhlenberg. Chester Springs is also home to The Mill at Anselma (Lightfoot Mill), a National Historic Landmark grain mill built in 1747. The Mill at Anselma is considered the best-preserved example of a grain mill of its kind in the country, boasting its original wooden gearing system and millstones. It is fully functional today and continues to mill flour and cornmeal for sale. The historic Larkin Covered Bridge, built in 1881, is located near the village of Eagle.

All content from Kiddle encyclopedia articles (including the article images and facts) can be freely used under Attribution-ShareAlike license, unless stated otherwise. Cite this article:
Chester Springs, Pennsylvania Facts for Kids. Kiddle Encyclopedia.