In addition to village's historic homes and church, there are a school, a gas station, two automobile repair shops, a pizza parlor, a doctor's office, and a day care center. A building intended for a Happy Harry's drug store was completed but never opened, and the unused property is now for sale. The US Postal Service maintains a modern post office at the southern edge of the village next to the township municipal building and facilities. 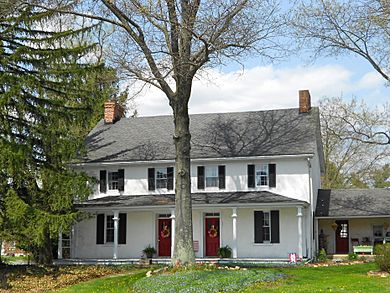 Kemblesville is located 15 minutes northwest of Newark, Delaware. While the area remains relatively rural, increasing development pressures are slowly bringing change to the village and its township.

All content from Kiddle encyclopedia articles (including the article images and facts) can be freely used under Attribution-ShareAlike license, unless stated otherwise. Cite this article:
Kemblesville, Pennsylvania Facts for Kids. Kiddle Encyclopedia.