Birchrunville is an unincorporated community, little more than a woodland crossroads in West Vincent Township in northern Chester County, Pennsylvania. It is about 40 miles (64 km) west of Philadelphia, near the Downingtown exit on the Pennsylvania Turnpike. The community is served by 19421 ZIP code.

Birchrunville is neither an incorporated area nor a census-designated place, all the data is for the ZIP code 19421. At the 2000 census there were 101 people, 38 households, and 34 families living in the community. The population density was 202 people per square mile (77/km2). The racial makeup of the community was 99% White, 0% African American, 0% Native American, 0% Asian, 0% Pacific Islander, 0% from other races, and 1% from two or more races. Hispanic or Latino of any race were 1%. 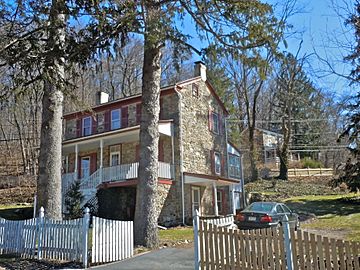 There were 38 households, 23.7% had children under the age of 18 living with them, 81.6% were married couples living together, 5.3% had a female householder with no husband present, and 10.5% were non-families. None of these had someone living alone who was 65 or older. The average household size was 2.66 and the average family size was 2.71.

All content from Kiddle encyclopedia articles (including the article images and facts) can be freely used under Attribution-ShareAlike license, unless stated otherwise. Cite this article:
Birchrunville, Pennsylvania Facts for Kids. Kiddle Encyclopedia.