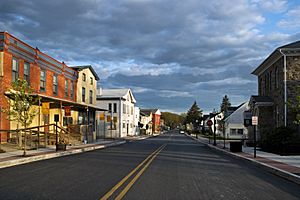 Atglen is a borough in Chester County, Pennsylvania, United States. The population was 1,406 at the 2010 census.

The land upon which Atglen now stands was once a wilderness. Cutting through it were paths made by Indians who traveled from Paxtang (present day Harrisburg) to present day New Castle, Delaware to trade with the Swedes and later, the English. The Great Minquas Path was one of these trails.

In 1717, Sadsbury township was organized. It included all of present-day Sadsbury Township as well as Fallowfield, Highland, and Valley townships. In August 1728, several inhabitants petitioned the court to separate Sadsbury from Fallowfield because of the former's size. In November of that year, the township was subdivided into East and West Sadsbury, and in 1729, upon the division of Chester County into Lancaster and Chester counties, the line between the two divisions of the township was made to conform to the county line.

During the mid 18th century more settlers arrived, drawn by the township's rich farming land. The Indian trails became horse tracks and later wagon tracks as farmers shipped their goods to market in Philadelphia, Newport, Delaware, and New Castle, Delaware. The old Provincial Highway as authorized by the government was laid out in 1730 and the Newport Road to the ore mines at Conwall in Lebanon County, was laid out in 1796.

The earliest organized religious group in the area were the Presbyterians, who in 1720 formed what is known today as the Upper Octorara Presbyterian Church. They were followed by the Quakers who in 1724 founded the Sadsbury Meeting House. A year later, the English settlers formed St. John's Church.

Andrew Moore (1688–1753), who had been influential with Samuel Miller in founding Sadsbury Meeting House, built a tub mill on his property.

There were 413 households, out of which 46.2% had children under the age of 18 living with them, 55.9% were married couples living together, 16.7% had a female householder with no husband present, and 23.2% were non-families. 17.9% of all households were made up of individuals, and 5.3% had someone living alone who was 65 years of age or older. The average household size was 2.95 and the average family size was 3.33.

All content from Kiddle encyclopedia articles (including the article images and facts) can be freely used under Attribution-ShareAlike license, unless stated otherwise. Cite this article:
Atglen, Pennsylvania Facts for Kids. Kiddle Encyclopedia.