West Grove is a borough in Chester County, Pennsylvania, United States. The population was 2,854 at the 2010 census.

The village of West Grove derived its name from the Friends Meeting House on Harmony Road built in 1787 several miles west of the Friends Meeting House in the village of London Grove. West Grove was separated from London Grove Township and became an incorporated borough on November 29, 1893. However, the decree of incorporation was not recorded until January 9, 1894, to prevent confusing the tax accounts of London Grove Township and to eliminate the need for a special borough election.

The move for incorporation followed several years of significant growth in West Grove that began to develop with the coming of the Philadelphia and Baltimore Central Railroad in 1860. The March 28, 1885, the Daily Local News described West Grove as "one of the most flourishing villages in this county" and stated that "it contains some three flouring mills and the largest nursery for rose culture [see below] in the United States (Dinger & Conrad, Co.), a large casket factory (Paxson Comfort) and a large number of dwellings." In May 1885, the Chester County Democrat reported that thirty new homes were under construction in the village of West Grove.

The "Father of West Grove" was Joseph Pyle. Born in Penn Township in 1836, Joseph Pyle opened a general store in 1860 in the brick building that is currently empty but housed a Rite Aid Pharmacy, Eckerd Pharmacy, and West Grove Pharmacy in the past. This building was constructed by Pyle and is believed to be the oldest brick structure in the center of town. Joseph Pyle constructed many of the commercial buildings along the present-day Exchange Place, including the Roselyn Theater Building in 1867 (torn down in 1980), the National Bank of West Grove building in 1883 and the K&P Building in 1885. Appointed postmaster of the borough by President Lincoln in 1864, Pyle served twenty-two years. Furthermore, Pyle introduced the manufacture of brick, planned and installed the first public water system, was President of the West Grove Improvement Company which financed the construction of the casket factory in 1885, served on Borough Council and was Burgess (Mayor) from 1900-1903.

The first election of borough officials was held in the West Grove Hotel on February 20, 1894. John P. Cheyney was elected the first Burgess (Mayor) in what amounted to a Democratic landslide. The Democrats won every office including Mayor, six school directors, two Squires, Constable, Assessor and Tax Collector, two Assistant Assessors, three Auditors, Town Clerk and High Constable. The first council meeting was held March 6, 1894, in the Library Room on the second floor of the National Bank Building on Exchange Place. The current mayor of West Grove is Stephen B. Black, Republican, who has been in office since August 2000.

Home of the Roses 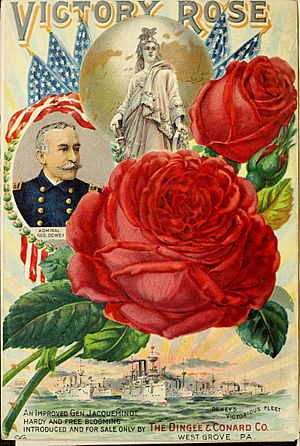 In 1868 Charles Dingee and Alfred Fellenberg Conard founded the Dingee & Conard Nursery, a commercial grower of fruit trees, roses and other nursery products. In the late 1880s the West Grove Post Office was the second largest in Chester County, mostly due to the volume of nursery products shipped by Dingee & Conard.

Located near the borough of West Grove is the Red Rose Inn, which was established in 1740. William Penn originally granted land for the inn subject to an annual rent payment of one red rose. The inn was subsequently renamed in honor of this event.

West Grove is on the boundary between hardiness zones 6b and 7a. [1] The climate is hot-summer humid continental (Dfa.)

Of the borough's 864 households, 45.3% included children under the age of 18, 59.4% were married couples living together, 14.6% had a female householder with no husband present, and 21.4% were non-families. 16.7% of all households consisted of solo individuals, and 6.7% of those living alone were 65 years of age or older. The average household size was 3.05 and the average family size was 3.39.

All content from Kiddle encyclopedia articles (including the article images and facts) can be freely used under Attribution-ShareAlike license, unless stated otherwise. Cite this article:
West Grove, Pennsylvania Facts for Kids. Kiddle Encyclopedia.