Byers Station Historic District is a national historic district located in Upper Uwchlan Township, Chester County, Pennsylvania. The district includes 26 contributing buildings in the crossroads community of Byers Station. The buildings date to the 19th century and include a number of notable Italianate style buildings. Notable buildings include a variety of residences, a factory, a Masonic lodge (1894), and the former Byers Hotel (c. 1874). The community grew around the Byers railroad station, after its opening in 1871, and continued after plumbago (graphite) was discovered in the area in 1875.

It was added to the National Register of Historic Places in 2002. 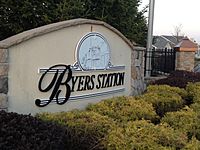 Byers Station community where the historic district is located

All content from Kiddle encyclopedia articles (including the article images and facts) can be freely used under Attribution-ShareAlike license, unless stated otherwise. Cite this article:
Byers Station Historic District Facts for Kids. Kiddle Encyclopedia.