John Wallace Scott, also known as J. Wallace Scott (August 31, 1832 – May 12, 1903), was a United States soldier who fought with the Union Army as a member of several Pennsylvania infantry units during the American Civil War. Severely wounded during the Siege of Petersburg in 1864, he was recognized for his meritorious service less than eight months later with his nation's highest award for bravery, the U.S. Medal of Honor, for capturing the enemy's flag while serving as captain of Company D of the 157th Pennsylvania Infantry during the Battle of Five Forks, Virginia on April 1, 1865. That award was conferred on April 27, 1865. 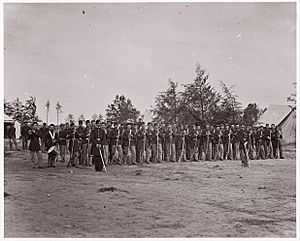 Two months before his 29th birthday, J. Wallace Scott became one of Pennsylvania's early responders to President Abraham Lincoln's call for volunteers to defend Washington, D.C. following the April 1861 fall of Fort Sumter to the Confederate States Army. After enrolling for military service in West Chester on June 4, 1861, he mustered in as a private with Company A of the 1st Pennsylvania Reserve Regiment (also known as the 30th Pennsylvania Volunteer Infantry). Promoted to the rank of corporal early during his tenure of service, he and his men captured two enemy supply wagons while assigned to picket duties along an Annapolis Railroad line in Virginia in August 1861. Drawn by two horses each, the wagons were loaded with $5,000 worth of gold bullion and silk slated for use in CSA military uniforms and flags, as well as quinine supplies destined for CSA physicians. Engaged with his regiment in the Seven Days Battles near Richmond, Virginia from June 25 to July 1, 1862, including the battles of Beaver Dam Creek (June 26), Gaines's Mill (June 27), Savage's Station (June 29), Glendale (June 30), and Malvern Hill (July 1), he then fought in the Second Battle of Bull Run (August 28–30), and the battles of South Mountain (September 14) and Antietam (September 17). Advanced to the rank of sergeant, he was honorably discharged on October 23 in order to assume a new post with a different regiment.

Commissioned as a second lieutenant, he was assigned to the command staff of Company B, 157th Pennsylvania Infantry on garrison duty at Fort Delaware during the late fall and winter of 1862. On February 27, 1863, Scott was then advanced again in rank. Commissioned as a first lieutenant, he was also appointed as regimental adjutant with the 157th Pennsylvania, which was attached to Tyler's Division, 22nd Corps, and assigned to the defense of Washington, D.C. On May 29, 1864, Scott and his battalion were reassigned to the 2nd Brigade, 4th Division, 5th Army Corps of the Army of the Potomac, and ordered out on operations between North Anna and Cold Harbor, Virginia. Engaged in the battles of Bethesda Church (June 1–3) and Cold Harbor (June 1–12), the 157th Pennsylvania then participated in the Siege of Petersburg, including the Battle of the Crater (July 30). Attached to the 3rd Brigade, 2nd Division, 5th Army Corps beginning in August 1864, the 157th Pennsylvanians were then assigned to operations along the Weldon Railroad beginning August 18.

While engaged in those operations, Scott was wounded. Shot in the right foot by a musket ball on August 23, he also sustained a shrapnel wound to his left leg when an artillery shell exploded near him. Successfully treated for his injuries, he returned to his regiment, and was then advanced in rank again. Commissioned as a captain by Pennsylvania Governor Andrew Gregg Curtin on October 18, he was placed in charge of the 157th Pennsylvania's D Company.

From February 5 to 7, 1865, Scott led his men in the Battle of Hatcher's Run. Then, as part of a reorganization of Pennsylvania units, he and the other men from the 157th Pennsylvania were merged into the 191st Pennsylvania Infantry on March 21, 1865, and assigned to the Appomattox Campaign. Just over a week later, Scott performed the act of valor for which he would later be awarded the U.S. Medal of Honor. Engaged in hand-to-hand combat while leading his men in the Battle of Five Forks, Virginia on April 1, 1865, he captured the battle flag of the 16th South Carolina Infantry. He was also brevetted as a major for his meritorious service that day.

Scott was then honorably discharged from the 191st Pennsylvania on May 29, 1865. 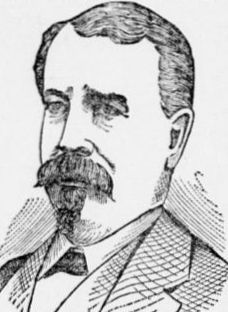 Following his honorable discharge, Scott returned home to the Philadelphia area. On November 13, 1866, he wed Mary Roney Thomas (circa 1836 – early 1899) at the Coatesville Presbyterian Church in Coatesville, Pennsylvania. Their two children, Gertrude Thomas Scott and Henry Guest Thomas Scott (1872–1942) were born in Philadelphia, respectively, on November 17, 1867 and April 8, 1872.

Appointed to the appraisal department of the U.S. Customs House in Philadelphia on February 22, 1870, J. Wallace Scott was subsequently promoted several times. By November 1886, he held the title of entry clerk.

An active member of the Grand Army of the Republic's post number two, Scott was also a member of the Pennsylvania Commandery of the Military Order of the Loyal Legion of the United States (insignia #13441), and an honorary member of the "Old Bucktails" regimental association.

Preceded in death by his wife and diagnosed with heart and kidney disease, Scott fell ill with pneumonia in 1903, and died in Philadelphia, Pennsylvania on May 12. His grave is located in the Upper Octorara Church Cemetery in Parkesburg, Pennsylvania.

All content from Kiddle encyclopedia articles (including the article images and facts) can be freely used under Attribution-ShareAlike license, unless stated otherwise. Cite this article:
John Wallace Scott Facts for Kids. Kiddle Encyclopedia.