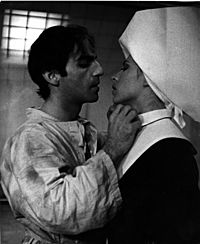 Ann Crumb (May 25, 1950 – October 31, 2019) was an American actress, animal rights activist and jazz singer. She was born in Charleston, West Virginia. Crumb was nominated for a Tony Award for her role in the 1992 Broadway production of Anna Karenina.

Crumb died on October 31, 2019 at her parents home in Media, Pennsylvania from ovarian cancer, aged 69.

All content from Kiddle encyclopedia articles (including the article images and facts) can be freely used under Attribution-ShareAlike license, unless stated otherwise. Cite this article:
Ann Crumb Facts for Kids. Kiddle Encyclopedia.