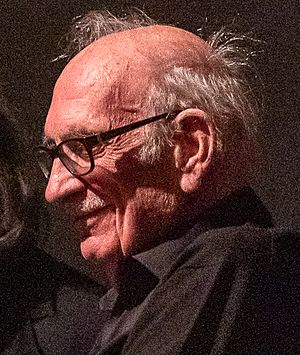 George Henry Crumb Jr. (born October 24, 1929) is an American composer. His works are modern classical and avant-garde music. He is known for creating unusual timbres, alternative forms of notation, and extended instrumental and vocal techniques.

Crumb won the 1968 Pulitzer Prize for Music for his orchestral work Echoes of Time and the River and a 2000 Grammy Award for Best Contemporary Composition for his work Star-Child .

All content from Kiddle encyclopedia articles (including the article images and facts) can be freely used under Attribution-ShareAlike license, unless stated otherwise. Cite this article:
George Crumb Facts for Kids. Kiddle Encyclopedia.