It is west of Interstate 476 (known locally as the "Blue Route") and east of S. Providence Road, PA 252. Crum Creek forms the township's eastern border with the borough of Swarthmore. Wallingford lies north of Chester on the southwest edge of the Philadelphia urban area. Wallingford is about 9 miles from Philadelphia proper.

There is a dry cleaning shop and a post office. Various doctors, dentists and lawyers are also located in Wallingford.

About half a dozen churches and chapels of several denominations are located in Wallingford, including Wallingford Presbyterian Church, St. John Chrysostom Catholic Church on Providence Road and the Foundry Church, near Media Parkway. Wallingford is also home to Congregation Ohev Shalom, a conservative synagogue located at the corner of Rt. 252 and Rt. 320. 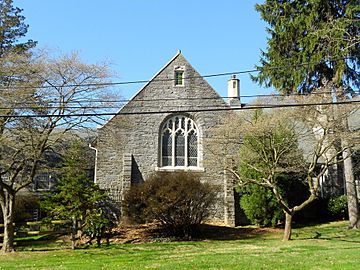 The local school district is the Wallingford-Swarthmore School District, which serves Wallingford, Swarthmore, Rutledge, and parts of Media, Morton and Rose Valley.

Wallingford is located along SEPTA's Media/Elwyn Line, and has a station whose design is attributed to the well-known Victorian architect Frank Furness. Wallingford is about 30 minutes from center city Philadelphia by rail. Effective July 1, 2013, the one-way ticketed fares are $5.75 weekdays and $5.00 evenings and weekends. On-board cash fares are $7.00 at all times.

The township's municipal offices are located at 214 Sykes Lane.

The Thomas Leiper Estate, Westlawn and Wolley Stille are listed on the National Register of Historic Places. 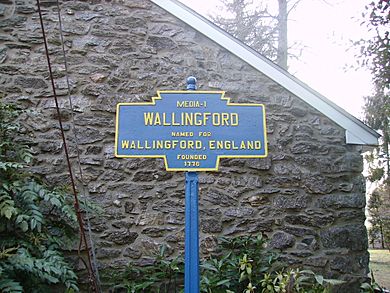 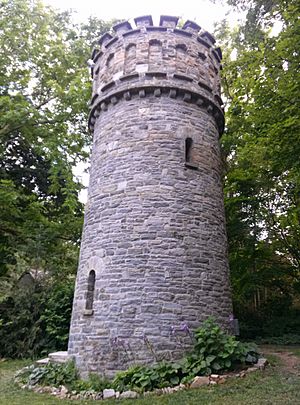 Tower on the grounds of Wallingford's Community Arts Center. 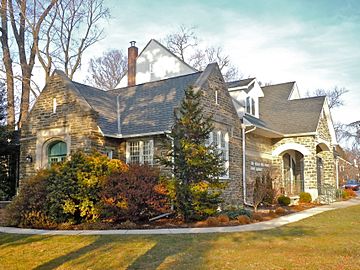 Mother of Providence Regional Catholic School is the area Catholic school. It formed in 2012 from a merger of St. John Chrysostom in Wallingford and Nativity BVM School in Media. Originally Nativity BVM was to be the location of the merged school, but St. John Chrystosom appealed and the archdiocese changed its decision.

Located in Wallingford is the Helen Kate Furness Free Library, which was renovated in 2006.

All content from Kiddle encyclopedia articles (including the article images and facts) can be freely used under Attribution-ShareAlike license, unless stated otherwise. Cite this article:
Wallingford, Pennsylvania Facts for Kids. Kiddle Encyclopedia.