Rose Valley is a small, historic borough in Delaware County, Pennsylvania, United States. Its area is 0.73 square miles (1.9 km2), and the population was 913 at the 2010 census. The area was settled by Quaker farmers in 1682, and later water mills along Ridley Creek drove manufacturing in the nineteenth century.

In 1901 Rose Valley was founded as an Arts and Crafts community by architect Will Price, who bought 80 acres (320,000 m2) of land around the former Rose Valley textile mill. Price was a follower of Henry George's economics (Georgism). Price also co-founded Arden, Delaware, a utopian single tax community based on Henry George's economic model. Nevertheless, the Georgist single-tax ideal was never implemented in Rose Valley. Crafts works soon foundered, leaving a legacy of impressive architecture, a preserved landscape, and a regional theatre, the Hedgerow Theatre (founded in 1923), as well as an artistic community that includes writers, painters, and architects. As a former mayor said, "Rose Valley is an island of non-conformity." The Rose Valley Historic District, covering essentially all of the borough, was listed on the National Register of Historic Places in 2010.

Native Americans of the Leni Lenape or Delaware tribe lived in the area when Europeans began arriving. A major trade route, the Great Minquas Path, passed though the site of the present borough, along Long Point, a hairpin turn in Ridley Creek, and then across the creek and through the center of the borough. Furs were carried along the path from Native Americans on the Susquehanna River to European traders on the Schuylkill and Delaware rivers.

Soon after William Penn received his charter for the Colony of Pennsylvania, three brothers, Thomas, Robert, and Randall Vernon, received land grants from Penn to settle over 900 acres (360 ha) in the present borough of Rose Valley and Nether Providence Township. The brothers arrived in Pennsylvania in 1682 and began farming the area, about 4 miles (6 km) north of Chester, which was then the largest settlement in the colony. Though the brothers purchased their land in 1681 while still in London, the land was not surveyed and patents were not granted for the land until years, perhaps decades, later. The Providence Great Road (now PA 252), just to the north of the borough, was laid out in the 1680s, and Brookhaven Road, on the borough's eastern boundary, was laid out in 1705.

Randall Vernon's house was built before 1700, and still stands. Robert Vernon may have built the house known as the "Bishop White House" about 1695. The name of the house comes from its use by the family of Bishop William White during the yellow fever epidemic of 1793 in Philadelphia. Though the bishop visited the house, he generally stayed in Philadelphia in 1793. Will Price modified this house after 1900, adding a stone porch and red tile roof. The Vernon families continued living in the area into the nineteenth century. The American Revolution split family members, who served as soldiers on both the American and British sides.

Many veterans of the Revolution are buried in now unmarked graves in the cemetery of the Old Union Methodist Church, the only church in the borough. The roots of the church may go back to 1804, and it was officially organized in 1811. The current building dates to 1835.

Following the Revolution, land in the southwest corner of the present borough was confiscated from a Vernon family member who had supported the British. The land was eventually sold to Jacob Benninghove, a Philadelphia tobacconist, who built a large mansion there in 1787. About the same time, he built a dam on Ridley Creek and a water-powered snuff mill. Samuel Bankcroft bought the house in 1831 and named it Todmorden Mansion. He lost the house in bankruptcy in 1842, but bought it back in 1857 and lived there until 1889. He built tunnels and secret chambers in the house for use in the Underground Railroad. 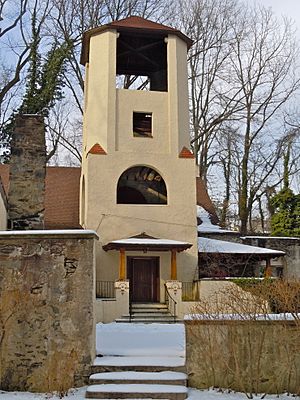 At least three mills operated in the area of Rose Valley. Little remains except a silted-in dam pond of what may have been the earliest mill, located on Vernon Run near the present Pool and Tennis Club. Near the Bishop White House, on Ridley Creek, the remains of a dam and millrace can be seen leading up to the "Old Mill", which is now used as the town hall. Benninghove's snuff mill was likely built here c. 1789. Between 1826 and 1850 it was run as a paper mill. It was reconstructed as a textile mill in 1861 and burned down in 1885. After 1900 Will Price built a furniture mill or craft shop on the foundations and later it was used as a meeting hall. After extensive fire damage, it was reconstructed into today's town hall.

Hutton's mill, on Rose Valley Road by Vernon Run, was built about 1840 as a feed mill. In 1847 it became a turning mill. It was used to produce bobbins for the nearby textile mill as well as serving as a warehouse. Later it produced sandpaper. Will Price also reconstructed this mill into a meeting house and theater. It also suffered fire damage, was again reconstructed, and now houses the Hedgerow Theatre.

Under the leadership of Will Price, the Rose Valley Association was formed in July 1901 to start an arts and crafts project and buy about 80 acres (32 ha) of land, an area that is the nucleus of today's borough. Investors contributed about $25,000 in capital, including $9,000 borrowed from nearby Swarthmore College to buy and improve the land. Price's vision may have been modelled on the utopian socialist society described in News from Nowhere by William Morris.

Price's liberal views led to some misconceptions about the project, according to his niece Eleanore Price Mather: "First, it was not a free love colony. Second it was not single tax .... And third, it was not communistic. Rose Valley was essentially an arts and crafts project."

Price had led a discussion group, including Edward Bok and brothers Samuel and Joseph Fels, and many in this group became investors or residents in Rose Valley. Other early residents included Hawley McLanahan, who became Price's architectural partner; McLanahan's father-in-law Charles T. Schoen; Price's employees at his architectural firm; and his relatives, including his brother Walter, also an architect. Feminist Anna Howard Shaw lived nearby. Administration of the project was in the form of a town meeting, called the "Folk Mote". 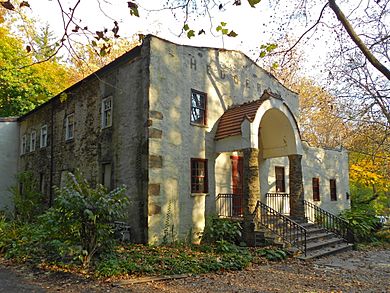 The Rose Valley Association did not produce arts and crafts itself, but rather rented out working space to craftsmen, and provided them housing, generally designed or renovated by Price. The crafts were sold from Price's office at 1624 Walnut Street in Philadelphia. Furniture, as well as ceramics and book binding, were produced at the Old Mill until about 1907. A journal, The Artsman, was published from 1903-1907. An art gallery was located in the old bobbin mill, then called "Artsman's Hall", and, starting in 1904, run by well-known artist Alice Barber Stephens, who lived in the mill until a nearby barn was converted by Price into her house, Thunderbird Lodge. Artsman's Hall was also used for theater, with the first play The Carpet Bagger's Revenge presented on New Year's Eve, 1904. Eventually the building became used solely by the Hedgerow Theatre, which is still active.

By 1910, however, craft production had faded and the community had become essentially a commuter suburb of Philadelphia, using the nearby Moylan - Rose Valley Station. The buildings designed or renovated by Price during this period may be Rose Valley's major achievement. According to George E. Thomas, "Rose Valley is of exceptional importance, a major American architectural landmark."

After 1910 Schoen, McLanahan, and Price bought the remaining land from the Rose Valley Association, and Price designed the "Rose Valley Improvement Company Houses" near the old bobbin mill. As a group, these are the most important group of houses designed, rather than renovated, by Price in Rose Valley.

In 1926 a Pennsylvania State historic marker was installed on Rose Valley Road to the south of Thunderbird Lodge. It commemorates the Great Minquas Path, a Native American trail that ran nearby. It features a sculpture of a beaver by Albert Laessle. 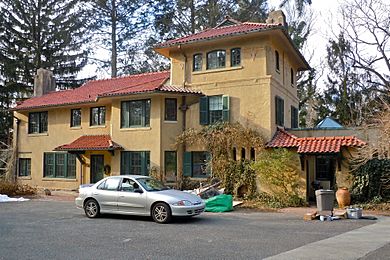 Rose Valley is located in central Delaware County, 1.5 miles (2.4 km) south of Media, the county seat, and 4 miles (6 km) north of Chester. It is bordered by Nether Providence Township to the north, east, and south, and by Middletown Township to the west. Ridley Creek, a south-flowing tributary of the Delaware River, forms the western boundary of the borough.

There were 347 households, out of which 34.9% had children under the age of 18 living with them, 76.9% were married couples living together, 6.6% had a female householder with no husband present, and 15.6% were non-families. 12.7% of all households were made up of individuals, and 5.5% had someone living alone who was 65 years of age or older. The average household size was 2.72 and the average family size was 2.99. 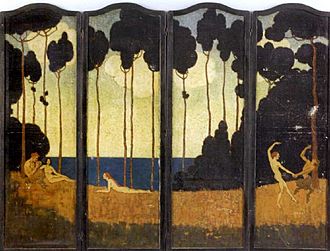 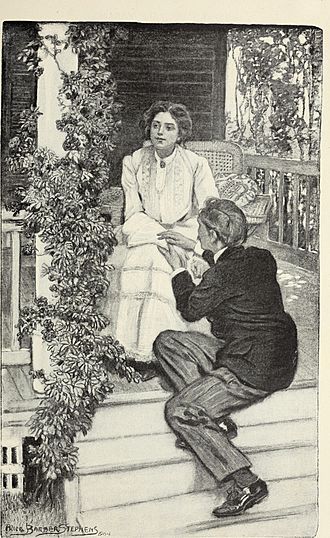 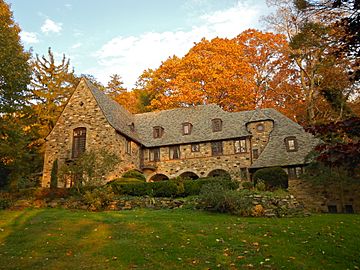 All content from Kiddle encyclopedia articles (including the article images and facts) can be freely used under Attribution-ShareAlike license, unless stated otherwise. Cite this article:
Rose Valley, Pennsylvania Facts for Kids. Kiddle Encyclopedia.