Rutledge is a borough in Delaware County, Pennsylvania, United States. The population was 784 at the 2010 census, down from 860 at the 2000 census.

Rutledge was founded in 1885 by a group of Philadelphia businessmen, and incorporated as a borough in 1887. Here is how the community was described in an 1897 promotional brochure:

"Located ten miles from Philadelphia, on the line of the Central Division of the Philadelphia, Wilmington and Baltimore Railroad, three minutes walk from Morton Station – it is reached in from 20 to 30 minutes by 21 trains daily… To the west lies the magnificent Swarthmore College, and to the southeast, three miles away, lies the Delaware River… its school is one of the finest in the county; its houses are neat and attractive, and their owners take great pride in their homes and the adornment of their grounds." 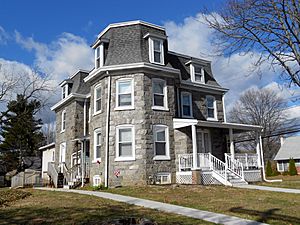 Since then, there have been a few name changes. The train line is SEPTA's Media/Elwyn Line, which provides 26 trains on weekdays from Philadelphia to what is now called the Morton-Rutledge Station. But in many ways, this description still holds true today. The schools in the Wallingford-Swarthmore School District are still among the finest in the county, and the homes, many of them dating back to the late 19th century, are still kept with pride by their owners. 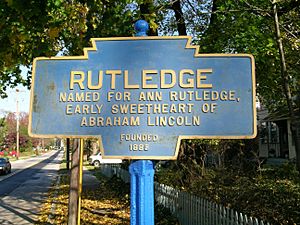 Keystone Marker perpetuating the myth that has the borough being named after Ann Rutledge.

There is a long-standing legend that the borough was named after Ann Rutledge, a sweetheart of Abraham Lincoln. This erroneous story is perpetuated in the Keystone Marker that greets those approaching Rutledge from the south on Morton Avenue. The actual story, according to the founders' brochure, is that the town was named after a then-popular romantic novel written in the 1860s. However, the site of what is now Rutledge borough was once a section of land on the estate of Edward Rutledge, who served as Representative from South Carolina at the Constitutional Convention of July 4, 1776, in Philadelphia and was the youngest signer of the Declaration of Independence.

According to the United States Census Bureau, Rutledge has a total area of 0.14 square miles (0.37 km2), all of it land.

Triangle Park, a children's park, is located in the borough, as is a fire department.

There were 297 households, out of which 40.1% had children under the age of 18 living with them, 61.3% were married couples living together, 9.1% had a female householder with no husband present, and 26.6% were non-families. 22.2% of all households were made up of individuals, and 10.1% had someone living alone who was 65 years of age or older. The average household size was 2.87 and the average family size was 3.44.

All content from Kiddle encyclopedia articles (including the article images and facts) can be freely used under Attribution-ShareAlike license, unless stated otherwise. Cite this article:
Rutledge, Pennsylvania Facts for Kids. Kiddle Encyclopedia.