Most of the Lake Erie coastline in Pennsylvania is highly developed. Erie Bluffs State Park is the largest undeveloped stretch of coastline in Pennsylvania. It is therefore highly prized as an example of the wild nature that once stretched up and down the coast of Lake Erie. This 1 mile (1.6 km) stretch of coastline is at an elevation of 636 feet (194 m). It features bluffs approximately 90 feet (27 m) tall, patches of old-growth forest, rare, endangered and threatened plant species, a "world-class" steelhead fishery, a savanna ecosystem, wetlands and several archaeological sites. 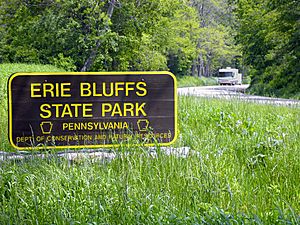 This acquisition fulfills a decades-long vision to make this distinctive tract a state park to be enjoyed by Pennsylvania citizens and visitors to this region. With its spectacular scenic vistas over Lake Erie and an adjacent world-class shallow stream steelhead fishery, Erie Bluffs will prove to be a unique eco-tourism destination. Add Erie Bluffs to Presque Isle State Park and the Tom Ridge Center and you have a trifecta – a winning combination of recreational and educational experiences that will be an economic engine for this region. A visit to Erie will not be complete without a stop at all three locations.

The land on which Erie Bluffs State Park is located was acquired in 2004 by the Western Pennsylvania Conservancy from Reliant Energy. The conservancy then turned over ownership of the parklands to the Commonwealth of Pennsylvania, to be managed by the Pennsylvania Department of Conservation and Natural Resources.

The following state parks are within 30 miles (48 km) of Erie Bluffs State Park:

All content from Kiddle encyclopedia articles (including the article images and facts) can be freely used under Attribution-ShareAlike license, unless stated otherwise. Cite this article:
Erie Bluffs State Park Facts for Kids. Kiddle Encyclopedia.