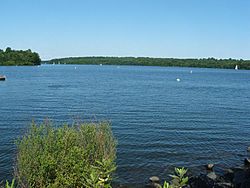 A view of the lake near the boat rentals

Nockamixon State Park is a Pennsylvania state park on 5,283 acres (2,138 ha) in Bedminster and Haycock Townships in northern Bucks County, Pennsylvania, in the United States. The park is one of the most popular in southeastern Pennsylvania, with most tourists visiting in the summer months.

Lake Nockamixon is an artificial reservoir formed by a dam on Tohickon Creek and serves as the centerpiece of Nockamixon State Park. Swimming is not allowed in the lake, but boating is popular, and the park maintains several marinas and boat rentals. Fishing is also popular, and common species include walleye, pickerel, carp, and various kinds of bass and catfish. The water is clean and blue and has a very faint current, since the lake is part of the course of Tohickon Creek, which feeds in midway along the northwestern edge of the lake and discharges at the dam at the southeast corner. Lake Nockamixon is also fed by two other creeks known as Haycock Run, which feeds in at the northernmost point, and Three Mile Run, which feeds in at the southernmost point.

In the winter, the water generally freezes over, allowing for ice skating and ice fishing.

Visitors to the lake can stay in one of several cabins or at a nearby youth hostel.

Another recreational activity at the park is whitewater kayaking. Every March and November, if high water conditions exist, there are timed water releases from the dam for one day. This turns all of Tohickon Creek south of the lake into a whitewater course, and kayakers can go all the way from the lake to where the creek meets the Delaware River.

Hunting is permitted at Nockamixon State Park on about 3,000 acres (1,200 ha). Hunters are expected to follow the rules and regulations of the Pennsylvania Game Commission. The common game species are squirrels, turkey, pheasant, and white-tailed deer. The hunting of groundhogs is prohibited. Hunters are limited to using shotguns at the park as per the regulations established by the Game Commission for southeastern Pennsylvania. 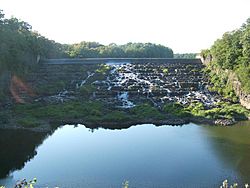 Swimming is prohibited in Lake Nockamixon. The swimming pool is open daily from 11:00 am until 7:00 pm beginning Memorial Day weekend and ending Labor Day weekend. The pool is closed on weekdays the first 2 full weeks of June and the last 2 full weeks of August and is open weekends only during those time periods. The pool is operated by the state and there is an admission fee. The pool is 0.5 acres (0.20 ha) in size and features slides, fountains, and a children's splash area.

Creation of the lake was first proposed by the Secretary of the Department of Forests and Water, Dr. Maurice K. Goddard, for recreational uses. It was originally to be called Tohickon Lake, after the creek, but its name was later changed to Nockamixon, meaning "place of soft soil" in the Lenape language. The park today contains several historic Native American sites.

Following its proposal in 1958, the dam was built by the Pennsylvania Department of Forests and Waters. The state park was opened to the public in December 1973.

In order to create the lake, the state bought 5,286 acres of what was known as the Tohickon Valley, including the community of Tohickon, and surrounding Bucks County areas.

The Weisel Hostel, a 100-year-old country estate in the park, is maintained by Hostelling International USA as an 18-bed youth hostel.

According to the Trewartha climate classification system, Nockamixon State Park has a Temperate Continental (Dc) Climate with hot summers (a), cold winters (o) and year-around precipitation. Dcao climates are characterized by at least one month having an average mean temperature ≤ 32.0 °F (0 °C), four to seven months with an average mean temperature ≥ 50.0 °F (10 °C), at least one month with an average mean temperature ≥ 72.0 °F (22 °C) and no significant precipitation difference between seasons. According to the Köppen climate classification, this climate is Dfa (hot-summer humid continental). Although summers are typically slightly humid at Nockamixon State Park, episodes of heat and high humidity can occur with heat index values > 104 °F (40 °C). Since 1981, the highest air temperature was 101.7 °F (39 °C) on 07/22/2011, and the highest average mean dew point was 74.1 °F (23 °C) on 08/12/2016. The average wettest month is July which corresponds with the annual peak in thunderstorm activity. Since 1981, the wettest calendar day was 6.62 inches (168 mm) on 08/27/2011. During the winter months, the plant hardiness zone is 6b with an average annual extreme minimum air temperature of −2.7 °F (−19 °C). Since 1981, the coldest air temperature was −13.7 °F (−25 °C) on 01/22/1984. Episodes of extreme cold and wind can occur with wind chill values < −14 °F (−26 °C). The average annual snowfall is between 30 and 36 inches (76 and 91 cm). Ice storms and large snowstorms depositing ≥ 12 inches (30 cm) occur once every few years, particularly during nor’easters from December through February.

The following state parks are within 30 miles (48 km) of Nockamixon State Park:

All content from Kiddle encyclopedia articles (including the article images and facts) can be freely used under Attribution-ShareAlike license, unless stated otherwise. Cite this article:
Nockamixon State Park Facts for Kids. Kiddle Encyclopedia.