Round Valley Reservoir facts for kids

The Round Valley Reservoir in Clinton Township in Hunterdon County, New Jersey, United States, was formed in 1960 when the New Jersey Water Authority constructed two large dams and flooded a large valley. The reservoir is named after the naturally formed circular valley surrounded by Cushetunk Mountain. The deep valley was caused by erosion of the soft sedimentary rock. The surrounding ridges of Cushetunk Mountain endure because they were underlaid with dense and durable volcanic rock diabase that cooled slowly under the surface of the earth.

Reaching depths of 180 feet (55 m), this 2,350 acre (8 km2) reservoir is best known for its pristine clear blue waters. The reservoir contains 55 billion US gallons (210,000,000 m3) of water for use in central New Jersey, making it the largest in the state. Its water is distributed during times of drought via the nearby south branch of the Raritan River. The New Jersey Division of Wildlife (a department of the New Jersey Department of Environmental Protection) claims the reservoir is the southernmost body of water that contains naturally reproducing lake trout. This is one of only two lakes in New Jersey with lake trout, the other being Merrill Creek Reservoir in Warren County. Some of the other species of fish in the lake include bass, pickerel, catfish, american eel, yellow perch, brown trout, and rainbow trout. The park also has a wilderness area for camping, swimming and SCUBA diving facilities, a boat ramp and nature hiking and biking trails. The reservoir has been called the Bermuda Triangle of New Jersey, and over 26 people have drowned there since 1971. Six of them have never been found. 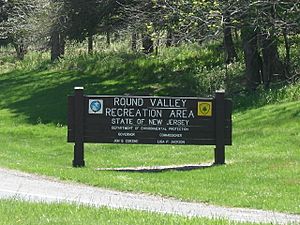 All content from Kiddle encyclopedia articles (including the article images and facts) can be freely used under Attribution-ShareAlike license, unless stated otherwise. Cite this article:
Round Valley Reservoir Facts for Kids. Kiddle Encyclopedia.