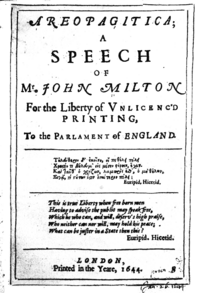 The first page of the first edition of Areopagitica.

Areopagitica is a book written by English poet John Milton in 1644. He wrote it to protest against censorship. Its full title is Areopagitica: A speech of Mr. John Milton for the liberty of unlicensed printing to the Parliament of England. Today, his book is called a tract. In the tract, Milton tries to defend the freedom of expression. Today, many people see it as one of the best defenses of the freedom of press ever written.

The tract is named after a speech by Isocrates, a Greek orator of the 5th century. The Areopagus is a hill in Athens, where many councils and tribunals were held. Isocrates wanted to restore one of these tribunals when he wrote the speech. In the speech,Milton argued that the Licensing Order of 1643 should be abolished; censorship had not been part of Greek or Roman societies. Milton uses many passages from the Bible to strengthen his argument. Milton had been censored himself when he tried to publish tracts which were in favor of allowing people to get divorced.

In Areopagitica, Milton argues that the status that was there before had worked best: By this law, all publications needed an authors name or that of a publisher. According to Milton, it is easy to find the authors or the publishers with this system. So if anything libelous is published, the books can still be destroyed after the fact.

All content from Kiddle encyclopedia articles (including the article images and facts) can be freely used under Attribution-ShareAlike license, unless stated otherwise. Cite this article:
Areopagitica Facts for Kids. Kiddle Encyclopedia.