Andrew White, S.J. (1579 – December 27, 1656) was an English Jesuit missionary who was involved in the founding of the Maryland colony. He was a chronicler of the early colony, and his writings are a primary source on the land, the Native Americans of the area, and the Jesuit mission in North America. For his efforts in converting and educating the native population, he is frequently referred to as the "Apostle of Maryland." He is considered a forefather of Georgetown University, and is memorialized in the name of its White-Gravenor building, a central location of offices and classrooms on the university's campus.

Born in London in 1579, he began formal education at age 14 at the English College at Douai, France. He entered English College of St. Alban's in Valladolid, Spain, in 1595 at the same time as other notable English Catholic priests, including the later Saint and martyr Thomas Garnet. He sought further education in Seville, and was ordained at Douai in 1605, after which he returned to England. Caught up in a wave of anti-Catholic arrests following the Gunpowder Plot, he was arrested and in 1606, banished from England. Moving to Leuven in Belgium, he joined the Society of Jesus on February 1, 1607. Despite the threat of capital punishment, White returned in 1609 to preach in Southern England. At the same time, he took positions as prefect of the seminaries at Leuven and Liège, between which and his English missions he split his time.

George Calvert, the first Baron Baltimore, whom White is credited in helping to turn to Catholicism in 1625, wrote to White from his colony on the Avalon Peninsula in Newfoundland after 1628. White's further interest in America is shown a letter from Superior General Mutio Vitelleschi in a letter dated March 3, 1629, approving a mission to America. Though George Calvert died in 1632, his son, Leonard Calvert, second Baron Baltimore, continued the colonization program. Baltimore had wanted White to help found a new colony in the Chesapeake Bay which had been chartered June 20, 1632. White himself wrote of the benefits of converting the native population, and in a document dated February 10, 1633, he specifically advocates Catholic settlement in "lord Baltimore's Plantation in Mary-land." He describes to potential financiers a paradisaical land with majestic forests and fruitful soil, advertising 2,000 acres (8 km2) of land for each potential settler. 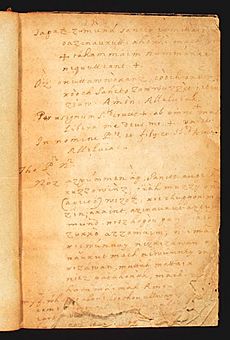 Prayers written by White between 1634 and 1640 in English, Latin, and Piscataway

On November 22, 1633, he took Baltimore's offer and set sail from Cowes on the Isle of Wight with lord Leonard Calvert and fellow Jesuits John Altham Gravenor and Thomas Gervase on The Ark, one of George Calvert's ships. Their landing on March 25, 1634, on St. Clement's Island marks the birth of the Maryland colony. The anniversary of this date is now celebrated as Maryland Day. In saying Catholic mass that day, he became the first priest to do so in the original thirteen English colonies. By July of that year, White had written his first discussion on the new colony, titled A Relation of the Sucessefull Beginnings of the Lord Baltimore's Plantation in Maryland. Sections of this were used to further advertise the colony.

White spent most of the next decade in St. Mary's City, working on English-Native American relations, particularly with the Yaocomico tribe, which consistently saw favorable trade treaties from Calvert because of White, and the Anacostans. In 1637 they were joined by Jesuits Thomas Copley and Ferdinand Poulton, and between 1634 and 1650 there averaged four permanent Jesuits in the Maryland Colony. To further his missionary work, he wrote dictionaries and translated the catechism into the native languages. On July 5, 1640, he famously converted Chitomachon, the chief of the Piscataway Indians, to Christianity. The chief was baptized as Charles. He later baptized a princess of the Patuxent Indians, and much of her tribe.

The English Civil War was to cut short his missionary work. In 1644, Richard Ingle and Puritan colonists from the neighboring Virginian colony of Jamestown, which had previously rebuffed George Calvert's visit, first raided St. Mary's City. Ingle succeeded in burning the town and, with the aid of William Claiborne, in controlling the Maryland Colony. White was again arrested for his Catholic preaching, and in 1645 he was sent with Thomas Copley in chains to London. Once there, he was tried for the crime of returning to England after being banished in 1606, which carried the punishment of death. He escaped this fate by arguing that his return was not of his own will. His petitions to return to Maryland denied, he spent the last decade of his life quietly in England until his death on December 27, 1656.

All content from Kiddle encyclopedia articles (including the article images and facts) can be freely used under Attribution-ShareAlike license, unless stated otherwise. Cite this article:
Andrew White Facts for Kids. Kiddle Encyclopedia.