Dewsbury (/ˈdjuːzbəri/) is a minster town in the Metropolitan Borough of Kirklees, in West Yorkshire, England. It is to the west of Wakefield, east of Huddersfield and south of Leeds. It lies by the River Calder and an arm of the Calder and Hebble Navigation.

Historically a part of the West Riding of Yorkshire, after undergoing a period of major growth in the 19th century as a mill town, Dewsbury went through a period of decline. More recently there has been redevelopment of derelict mills into flats, and regenerating of city areas.

According to the 2011 census the Dewsbury urban sub-area had a population of 62,945. Dewsbury is the largest town in the Heavy Woollen District, a conurbation of small mill towns.

The Domesday Book of 1086 records the name as Deusberie, Deusberia, Deusbereia, or Deubire, literally "Dewi's fort", Dewi being an old Welsh name (equivalent to David) and "bury" coming from the old English word "burh", meaning fort.

Other, less supported, theories exist as to the name's origin. For example, that it means "dew hill", from Old English dēaw (genitive dēawes), "dew", and beorg, "hill" (because Dewsbury is built on a hill). It has been suggested that dēaw refers to the town's proximity to the water of the River Calder.

Historically other origins were proposed, such as "God's fort", from Welsh Duw, "God". "Antiquarians supposed the name, Dewsbury, to be derived from the original planter of the village, Dui or Dew, who … had fixed his abode and fortified his "Bury". Another conjecture holds, that the original name is Dewsborough, or God's Town" (1837)

In Saxon times, Dewsbury was a centre of considerable importance. The ecclesiastical parish of Dewsbury encompassed Huddersfield, Mirfield and Bradford. Ancient legend records that in 627 Paulinus, the first Bishop of York, preached here on the banks of the River Calder. Numerous Anglian graves have been found in Dewsbury and Thornhill. 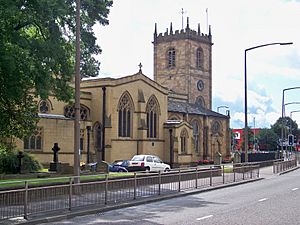 Dewsbury Minster lies near the River Calder, traditionally on the site where Paulinus preached. Some of the visible stonework in the nave is Saxon, and parts of the church also date to the 13th century. The tower houses "Black Tom", a bell which is rung each Christmas Eve, one toll for each year since Christ's birth, known as the "Devil's Knell", a tradition dating from the 15th century. The bell was given by Sir Thomas de Soothill, in penance for murdering a servant boy in a fit of rage. The tradition was commemorated on a Royal Mail postage stamp in 1986.

Dewsbury market was established in the 14th century for local clothiers. Occurrences of the plague in 1593 and 1603 closed the market and it reopened in 1741.

Throughout the Middle Ages, Dewsbury retained a measure of importance in ecclesiastical terms, collecting tithes from as far away as Halifax in the mid-14th century. John Wesley visited the area five times in the mid-18th century, and the first Methodist Society was established in 1746. Centenary Chapel on Daisy Hill commemorates the centenary of this event, and the Methodist tradition remained strong in the town. 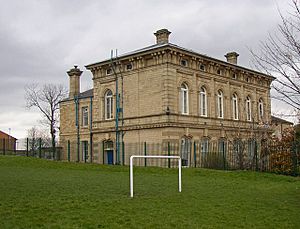 In 1770, a short branch of the Calder and Hebble Navigation was completed, linking Dewsbury to the canal system giving access to Manchester and Hull. By the time of the Industrial Revolution, Dewsbury was a centre for the shoddy and mungo industries which recycled woollen items by mixing them with new wool and making heavy blankets and uniforms. The town benefited economically from the canal, its location at the heart of the Heavy Woollen District, and its proximity to coal mines. The railway arrived in 1848 when Dewsbury Wellington Road railway station on the London and North Western Railway opened; this is the only station which remains open. Other stations were Dewsbury Central on the Great Northern Railway which closed in 1964 and Dewsbury Market Place on the Lancashire and Yorkshire Railway which closed in 1930; a fourth goods-only railway station was built in the early 20th century at Savile Town by the Midland Railway. In 1985 a bypass road was built on the site of Central Station and its adjacent viaduct, and nothing remains of Market Place railway station. The 19th century saw a great increase in population, rising from 4,566 in 1801 to around 30,000 by 1890. 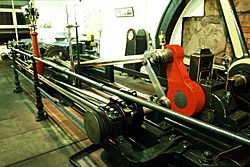 The town's rapid expansion and commitment to industrialisation resulted in social instability. In the early 19th century, Dewsbury was a centre of Luddite opposition to mechanisation in which workers retaliated against the mill owners who installed textile machinery and smashed the machines which threatened their way of life. In the 1830s, Dewsbury was a centre of Chartist agitation. In August 1838, after a speech by Chartist leader Feargus O'Connor, a mob of between five and seven thousand people besieged the Dewsbury Poor Law Guardians in the town's Royal Hotel. The mob was dispersed by troops. Trouble flared in 1840 when radical agitators seized control of the town, and troops were stationed to maintain order. This radical tradition left a legacy in the town's political life, its first elected MP in 1867 was John Simon, a Jewish lawyer from Jamaica and a Liberal. The tradition of firing the "Ten o'Clock" gun was a hangover from the Luddite problems. Presumably it was fired to reassure that all was well. (or it may have been the other way round) Except for a period during wartime, it could be heard all over the area. It was resumed after the Second World War but later discontinued. The mills were family businesses and continued manufacturing after the wool crisis in 1950–51, which saw Australian sheep farmers begin to charge higher prices. However, the recovery of the late 1960s was reversed by the 1973 oil crisis, and the textile industry in Dewsbury declined, with only bed manufacturing remaining a large scale employer.

After 2005, Dewsbury was labelled a troubled town after negative press reports and became "the town that dare not speak its name" after high-profile crimes brought it into the media spotlight. In June, a girl of 12 was charged with grievous bodily harm after attempting to hang a five-year-old boy from Chickenley. Mohammad Sidique Khan, ringleader of the group responsible for the 7 July 2005 London bombings lived in Lees Holm.

On 19 February 2008, Shannon Matthews, a nine-year-old girl from the Moorside Estate, was reported missing. After a 24-day hunt which attracted huge media and public attention nationally, she was found hidden in a flat in the Batley Carr area on 14 March 2008. Her mother Karen Matthews, along with Michael Donovan, the uncle of her step-father Craig Meehan, were later found guilty of abduction and false imprisonment and both jailed for eight years, as part of a plot to claim the reward money for her safe return by pretending to have solved her disappearance.

In October 2010, the Dewsbury Revival Centre opened, in the refurbished former St Mark's Church on Halifax Road, the church attended by the Titanic bandmaster Wallace Hartley.

In July 2014, Kirklees Council enforced a media ban covering the visit of the Princess Royal who was due to deliver a 1-minute and 15 second speech on the importance of restorative justice. Kirklees Council later responded that the highly unusual media ban had been insisted upon by the Royal Household. Buckingham Palace however was mystified over the ban with a Royal spokesman stating: “This visit has been openly listed in the future engagements section on the Royal website for the last eight weeks. There are no restrictions on reporting on the event from the Royal Household.” 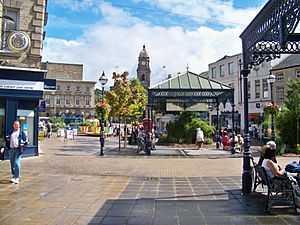 Dewsbury is situated between Leeds and Bradford 8 miles (13 km) to the north, Huddersfield a similar distance to the south west, and Wakefield 6 mi (10 km) east. Its proximity to these major urban centres, the M1 and M62 motorways and its position on the Huddersfield Line, served by the TransPennine Express, have contributed to its popularity as a commuter town.

Dewsbury is part of the West Yorkshire Urban Area, although its natural boundaries are not well defined, with built up areas of the town running into Batley, Heckmondwike and Ossett.

Geologically, the town is situated on rocks of the Carboniferous Period, consisting of coal measures and gritstones. Quaternary Period rock, glacial deposits and gravels exist in the Calder Valley. Coal, sandstone and gravel have been exploited commercially. Average rainfall is 100 cm per annum.

The town is dominated by hills, notably Earlsheaton, Dewsbury Moor, Staincliffe and Thornhill. The town centre is between 130 and 180 feet (40 and 55 metres) above sea level, rising to 360 ft (110 m) at Earlsheaton and Batley Carr, and 755 ft (230 m) at Grange Moor. The approach from Earlsheaton through the Wakefield Road cutting, constructed in 1830 , is dramatic with the view of the town centre in the Calder Valley opening up. 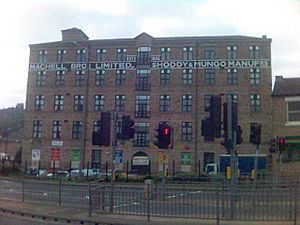 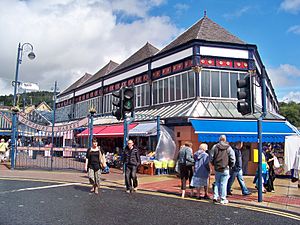 From the outset of the industrialisation of the town with its many mills, a large influx of Irish workers arrived in the town, settling in the Westtown area. This area has the large and imposing Our Lady and St. Paulinus Roman Catholic Church and its school, once run by the nuns of the area. The Irish National Club also is home to Dewsbury Celtic amateur rugby league club, with its many age groups of players.

The town has a large Asian community. Savile Town and Ravensthorpe are populated mainly by Muslims of Indian and Pakistani origin. In recent years, there has also been an immigration of Iraqi Kurds and Hungarians into the town. Dewsbury has been accused of having a controversial Shariah arbitration court. The Dewsbury Moor, Ravensthorpe and Chickenley areas are classed among the 10% most deprived areas in the UK. In contrast to some British towns and cities, the east side of the town is generally more affluent. The majority of houses in the town are in the cheapest band for council tax, for house prices are amongst the lowest in the country.

The town centre includes large retailers such as Asda, Sainsbury's, Next and Matalan it also has many other stores. The local market comprising 400 stalls is one of the busiest in Yorkshire and today draws coach-loads of visitors to the town. Wednesdays and Saturdays are the normal market days with the popular flea market on Fridays. The town's mills were located just south of the River Calder in the town centre. As the mills closed, this area became a large brownfield site. However, many of the units have been reoccupied and the town's largest employer, Carlton Cards, is based in this area. 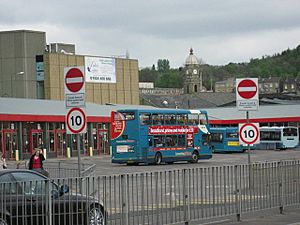 Inside Dewsbury bus station in

The town is served on the railway network by Dewsbury railway station. 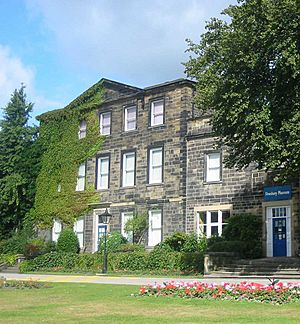 Dewsbury Museum is located within the mansion house in Crow Nest Park. After an extensive 18-month programme of building and gallery refurbishment the museum reopened in the summer of 2010. Nearby attractions include the National Coal Mining Museum for England.

In 2009 Dewsbury hosted Kirklees Council's Concerts in the Park and over 8,000 came to watch pop stars McFly, Ironik and the Yeah You's play a free concert.

The town also has an annual event called Spirit, a street theatre show every winter which takes place in the town centre.

All content from Kiddle encyclopedia articles (including the article images and facts) can be freely used under Attribution-ShareAlike license, unless stated otherwise. Cite this article:
Dewsbury Facts for Kids. Kiddle Encyclopedia.