Batley is a town in the Metropolitan Borough of Kirklees, West Yorkshire, England. It lies 7 miles (11 km) south-east of Bradford, 7 miles (11 km) south-west of Leeds and 1 mile (2 km) north of Dewsbury, near the M62 motorway. Historically in the West Riding of Yorkshire, in 2011 its two wards (Batley East and Batley West) had a combined population of 38,573. Other nearby towns include: Morley to the north-east, Ossett to the south-east and Brighouse west-south-west. Batley is part of a special EU transformation zone. 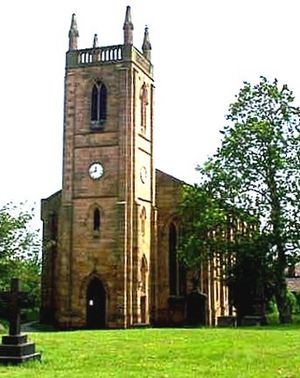 St Paul's Church in the Hanging Heaton area of Batley

The name Batley is derived from Danish, meaning either valley or homestead of bats, or more likely, homestead of the locally prominent Batte family. It is recorded in the Domesday Book as 'Bateleia'. After the Norman conquest, the manor was granted to Elbert de Lacy and in 1086 was within the wapentake of Morley. It subsequently passed into the ownership of the de Batleys, and by the 12th century had passed by marriage to the Copley family. Their residence at Batley Hall was held directly from the Crown; at this time the district fell within the Duchy of Lancaster. The population at this time was 30 to 40 people. By the late 14th century, the population has increased to around 100. 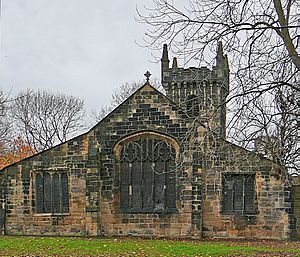 The church of All Saints

There has been a church in Batley since the 11th century. Batley Parish Church was built in the reign of Henry VI (1422–1461), and parts of the original remain. Despite Batley being an ancient settlement, this is all that remains of any great antiquity.

Howley Hall at Soothill was built during the 1580s by Sir John Savile, a member of the great Yorkshire landowners, the Savile family. The house was besieged during the English Civil War in 1643 before the Battle of Adwalton Moor but appears to have sustained no serious damage. It continued to be occupied during the 17th century but fell into disrepair. Howley Hall was demolished in 1730. Many ruins exist including the cellars of its great hall.

Batley Grammar School was founded in 1612 by the Rev. William Lee and is still in existence.

Methodism came to Batley in the 1740s and took a strong hold in the town which continued into the 20th century. John Nelson from Birstall was a leading lay preacher in the early Methodist movement. Areas of the town, such as Mount Pleasant, were noted for their absence of pubs due to the Methodist beliefs of the populations.

During the late 18th century the main occupations in the town were farming and weaving. The Industrial Revolution reached Batley in 1796 with the arrival of its first water powered mills for carding and spinning. During the next half century the population grew rapidly, from around 2,500 at the start of the 19th century to 9,308 at the 1851 census. The parish of Batley at this point included Morley, Churwell and Gildersome, with a total population of 17,359.

A toll road built in 1832 between Gomersal and Dewsbury had a branch to Batley (the present day Branch Road) which allowed for "the growing volumes of wool, cloth and coal" to be transported. Until then there had only been foot and cart tracks. Around the same time there were strikes in the mills, which led to an influx of Irish workers who settled permanently. Initially this led to antagonism from residents, due to the lower wages demanded by the Irish workers and general anti-Roman Catholic sentiment, but this faded in time. By 1853 Catholic services were held regularly in the town; its first Roman Catholic church, St Mary of the Angels, was not built until 1870 and is still in existence.

By 1848 there was a railway station in Batley, and in 1853 Batley Town Hall was erected. It was enlarged in 1905, and is in the Neoclassical style, with a corbelled parapet and pilasters rising to a centre pediment. In 1868 Batley was incorporated as a municipal borough, the former urban district of Birstall was added to it in 1937.

1853 also saw the establishment of a small confectionery shop by Michael Spedding. His business expanded, moving to larger premises in 1927 becoming Fox's Biscuits. Today, along with Tesco, it is one of the largest employers in the town. 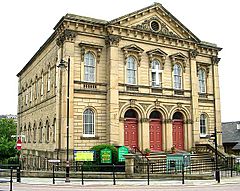 During the late 19th century, Batley was the centre of the "shoddy trade" in which wool rags and clothes were recycled by reweaving them into blankets, carpets and uniforms. In 1861 there were at least 30 shoddy mills in Batley. The owners of the recycling businesses were known as the "shoddy barons". There was a "shoddy king" and a "shoddy temple", properly known as the Zion Chapel. This imposing building in the town centre was opened in 1870, and reflected the popularity of the Methodist movement. The chapel is still active today. At the close of the 19th century, growth in population changed the form of governmental institutions above the parish of Batley; the Morley division of the wapentake of Agbrigg and Morley was disused as special purpose districts were formed.

The library was built in 1907 with funds donated by the philanthropist Andrew Carnegie. The library has been modernised, with a new microfilm viewer, and reels of the Batley News dating back over 120 years. The newspaper was founded by James Fearnsides – a local printer. His grandson Clement, later became the mayor of Batley. There was coal mining in Batley at this time. The first records of coal mining in Batley date back to the 16th century at White Lee; the last pit in the town closed in 1973.

From the end of the 1950s, the need for cheap labour in the town's textile industries drew in migrant labourers from Gujarat, Punjab and other parts of modern-day Pakistan and India.

In 1974 responsibility for local government passed to Kirklees Metropolitan Council, with its headquarters in Huddersfield.

From the end of the 1950s, the need for cheap labour in the town's textile industries drew in migrant labourers from Gujarat, Punjab and other parts of modern-day Pakistan and India. The South Asian population of Batley is now around 33% in Batley West and 54% in Batley East. Batley has an Asian Muslim population consisting of people mainly from India. 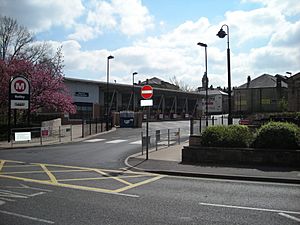 Batley bus station serves the town and is owned and maintained by Metro (West Yorkshire PTE).

The bus station is situated in Batley town centre and can be accessed from Bradford Road and St. James's Street. It was re-built by Metro in April 2005 replacing the previously owned Arriva Yorkshire site. There are six stands and a real-time information board at the bus station. Arriva Yorkshire is the main operator.

The main operator from Batley bus station is Arriva Yorkshire. Buses run from the bus station around Heavy Woollen District (North Kirklees area) and go as far as Huddersfield, Bradford, Leeds and Wakefield. 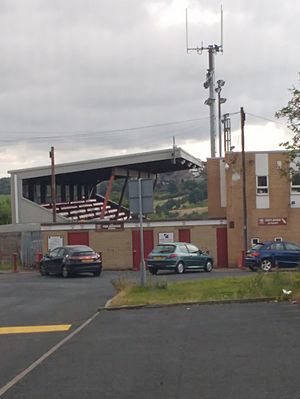 Wilton Park (Batley Park) is a large park between the town centre and Birstall. In its grounds are the Milner K. Ford Observatory (built in 1966 and home to the Batley & Spenborough Astronomical Society) and Bagshaw Museum. The museum is located in a house built by the "shoddy baron", George Sheard, and features local history, natural history, curios from around the world, and an Ancient Egyptian exhibition. The museum (originally the Wilton Park Museum) is named after its first curator Walter Bagshaw, a Batley councillor and extensive traveller. 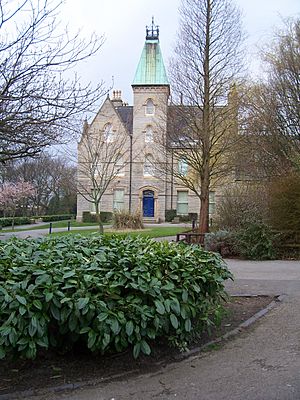 Bagshaw Museum, with its distinctive copper tower, was originally the home of the Sheard family

The Yorkshire Motor Museum had a small but varied collection of cars dating back to 1885, and reflecting local car makers as well as more famous marques. The museum closed in 2010.

Between 1966 and 1977 the Batley Variety Club was frequented by many notable acts including Louis Armstrong, Johnny Mathis, Eartha Kitt, the Bee Gees, Roy Orbison, the Hollies and Cliff Richard among others. For a brief period it was named the Crumpet, after which it was closed for four years surviving numerous applications to have the building demolished. It is now the Frontier nightclub, as it has been since the late 1970s, and hasn't had a refit since. The Frontier was sold to businessmen in April 2005 and continues to operate as a nightclub whilst hosting variety shows and sporting events such as boxing, snooker and darts.

In cricket, Batley has several local teams, and is also part of the cricket association for the Heavy Woollen District. The original definition of the latter area was to within a six-mile radius of Batley Town Hall. The Heavy Woollen Cup can now be entered by any team within 18 miles of Batley, but there is an upper limit of 64 teams.

A dramatic society was founded in October 1913 at Shelton’s café at 53 Commercial Street to present dramatic works to raise funds for Batley and District Hospital. On 8 January 1914 at a meeting in the Temperance Hall, it was decided that it would be known as the “Batley Amateur Thespian Society” and it became affiliated with the National Operatic and Dramatic Association.

As Batley shares boundaries with both Dewsbury and Heckmondwike, parts of Batley Carr, Hanging Heaton and Staincliffe are part of Dewsbury, while part of White Lee is in Heckmondwike. There is an area of Ossett known as Healey, which is identical in name to the Batley district of Healey; the Ossett area is sometimes referred to as "Healey Mills" due to the very large congregation of mills that once existed in that area.

Monty Python's Flying Circus had a series of recurring sketches in which the members of the Batley Ladies Townswomen's Guild would present famous plays or musicals, or re-enact various historical battles (such as the Battle of Pearl Harbour), by charging at each other, swinging handbags and wrestling in the mud.

Batley is also the setting for the children's television programme My Spy Family.

Batley was used for location filming of the fictional town of Barfield in the 1955 film Value for Money, starring John Gregson and Diana Dors.

Wilton Park was used for scenes in the 1997 film My Son the Fanatic starring Om Puri, Rachel Griffiths and Stellan Skarsgård.

All content from Kiddle encyclopedia articles (including the article images and facts) can be freely used under Attribution-ShareAlike license, unless stated otherwise. Cite this article:
Batley Facts for Kids. Kiddle Encyclopedia.