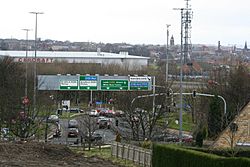 Tingley is a settlement in West Yorkshire, England, forming part of the parish of West Ardsley and of the City of Leeds metropolitan borough. The name is first attested in the thirteenth century, and on through the Middle Ages, in forms such as Thing(e)law(e), and Tinglawe in 1608. This is from Old English þing 'meeting, assembly' and hlāw 'mound, hill, burial mound'. Thus it was probably the meeting place for Morley Wapentake.

Historically part of the West Riding of Yorkshire, Tingley is situated between Leeds, Wakefield and Bradford but considered part of Morley. It has the WF3 (Wakefield) postcode area while the village telephone numbers are "0113", the Leeds prefix.

Until recently a semi-rural location, Tingley has seen much residential development over the last twenty five years, as it is only five miles south of Leeds City Centre. Close by to the east along the A650 is West Ardsley and East Ardsley, and Woodkirk to the south.

The coal and woollen industries which provided much employment until well after World War II have now completely disappeared and Tingley is essentially a dormitory suburb. Within a five-mile radius of the settlement lie the town centres of Morley, Leeds, Batley, Dewsbury, Ossett and Wakefield.

Tingley is also home to Tingley Athletic JFC (junior football club). The club traditionally play in white and green stripes with black shorts and socks, and have had a number of players go on to play at professional and semi-professional level. The club are currently having a new home ground built which will consist of a clubhouse, changing rooms and at least two full size high quality pitches.

Close by at the start of the A653 to Leeds is the main transmitter for Radio Aire, and also the studios of Real Radio (Yorkshire). The Leeds branch of the Available Car chain of used car hypermarkets is also in Tingley, and is part of the Capitol Park development site.

Tingley has had several public houses, including the former White Bear, now closed (which was prominently located next to Tingley roundabout) and the New Scarborough (on Old Dewsbury Road). The former Bull's Head (towards East Ardsley on the A650) has now been closed and turned into housing. There are three more public houses in East and West Ardsley: The Hare and Hounds off Heybeck Lane and The Smithy and The British Oak off Westerton Road.

Tingley is perhaps best known for its eponymous roundabout, at the junction of the M62 motorway and the A653 (Dewsbury Road). The A650 connects with this roundabout. Tingley was intended to be the southern terminus of the main line of the now shelved Leeds Supertram project.

All content from Kiddle encyclopedia articles (including the article images and facts) can be freely used under Attribution-ShareAlike license, unless stated otherwise. Cite this article:
Tingley Facts for Kids. Kiddle Encyclopedia.