Ossett is a market town in the City of Wakefield metropolitan borough in West Yorkshire, England. Historically part of the West Riding of Yorkshire, it is situated between Dewsbury, Horbury and Wakefield. At the 2011 Census, the population was 21,231. Ossett forms part of the Heavy Woollen District.

Ossett derives from the Anglo Saxon and is either "the fold of a man named Osla" or " a fold frequented by blackbirds". Ossett is sometimes misspelled as "Osset". In Ellis' On Early English Pronunciation, one of the founding works of British linguistics, the incorrect spelling is used. The British Library has an online dialect study that uses the spelling. One new alternative theory is that it is the place where King Osbehrt died after receiving fatal wounds when fighting the Great Heathen Army of the Vikings at York on March 21st 867. An exceedingly rare clustering of high status Anglian graves, one bearing the Anglian royal symbol of the dragon and the name Osbehrt, was found in the churchyard at Thornhill Parish Church directly across the valley from - and within sight of - Ossett.

Ossett appears in the 1086 Domesday Book as "Osleset", which was in the Manor of Wakefield. The Domesday Book was compiled for William the Conqueror in 1086. "Osleset" was recorded as three and a half carucates which is the land needed to be ploughed by three teams of eight oxen. Woodland pasture measured "half a league long as much broad" (roughly six furlongs by six furlongs). Four villans and three bordars lived in Osleset, a villan was an upper status villager, a bordar was a lower status villager.

Coal-mining was, up to the late 1960s, Ossett's second industry in terms of people employed and the first in terms of males employed. Coal has been mined since the 14th century and there were a large number of pits in Ossett during the 19th century. The pits included Old Roundwood, opened in 1851 mining the Gawthorpe seam. The Haigh Moor seam opened in 1860 and the Silkstone seam opened in 1893. Pildacre pit shut due to flooding in 1875 but remained as a source of water for Ossett. Westfield shut in the early 1900s. The Chidswell riot in 1893 was caused by striking miners trying to reach Westfield to stop other miners working. Another pit down Healey Road was also the scene of tension between police and striking miners. Low Laithes pit shut in 1926, however the seams later flooded and were responsible for the Lofthouse Colliery disaster in 1973. Greatfield shut in the 1950s, Old Roundwood shut in 1966 and Shaw Cross, on the Ossett/Dewsbury border near the current Dewsbury Rugby League stadium, closed in 1968. 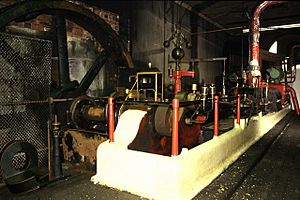 The steam engine at Runtlings Mill in 1987.

Author and local resident Stan Barstow said that Ossett and Horbury were the "border country" where the north-west of the coalfield merged with the south-east of the wool towns. Local historian John Goodchild said, "The place was essentially one of small mines and small mills". The town was once a thriving centre of the "shoddy" industry; recycling woollen garments. Whilst some mill towns employed mostly females in its textile sector, Ossett's mills always had roughly equal numbers of men and women. The town's mills were generally small, but they had a reputation as high-quality producers. Whitehead's Mill used to have a carnival float that said "We Export to the World" at the Gawthorpe May Pole parade.

During the 1970s, Woodhead Manufacturing employed 1,500 people on this site in its two premises fronting Church Street and Kingsway. The shock absorber business was the last part of the site operations to close in the early 1990s. The site is now a housing estate and Woodhead's exists in name only and is run from an industrial estate in Leeds. There is however, a large old 'mill type' building situated on Church Street, which still shows Woodhead signage in large blue lettering, on the buildings' facade. The building however, is in a very derelict and dangerous state, largely due to vandalism. Arson has been the greatest damage inflicted, leaving the buildings' roof black and charred. Also a lack of upkeep is to blame for its current state. It has had building work attempted many times in the past, but never completed and still remains in a derelict state that until now and is now being converted into apartments The yard and building has a large stone wall and locked iron gates to the front, which edges right up to the pavement on Church Street, and high metal fencing to the rear, which edges up to a grassed area next to the large housing estate. The housing estate situated at the rear, is fairly large and has a selection of mixed style and sized modern houses and four storey flats, occupied by singletons, couples and families.

In the Second World War, Ossett was accidentally bombed on 16 September 1940. Ten High Explosive bombs were dropped. No one was killed, save for a number of chickens and several properties were damaged. A V-1's engine was reportedly heard to cut out, and came down at Grange Moor, to the west of the town.

Ossett was, for a brief period in the 19th century, a spa town. Having been founded by a local stonemason who was inspired by Harrogate and Cheltenham, the waters were popular with those seeking relief from certain skin diseases in the early 19th century, but it remained a small spa during this period. In the 1870s, a plan to transform Ossett into a "second Harrogate" ended in failure, and the spa closed as a result. The south-east of the town is still known as "Ossett Spa". 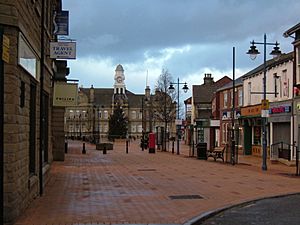 At the 2011 Census, the population was 21,231. Ossett's convenient proximity to the M1 motorway has led the old industrial town to become more affluent in recent years, attracting both industry and resident commuters to Leeds. This leaves Ossett with higher priced housing compared to nearby areas. 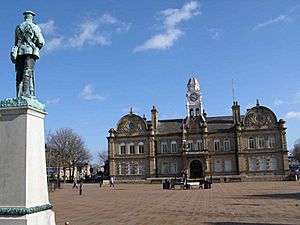 Trinity Church was consecrated in 1865 and its spire which rises to 226 feet is a landmark that can be seen for miles around. A red phone booth in Ossett town centre, opposite the Kingsway roundabout, is a grade II listed building. Ossett Town Hall celebrated its centenary in June 2008. Gawthorpe, an area of north Ossett, is known for its landmark water tower.

The Romans constructed a road from Halifax to Wakefield, this road became a turnpike road in 1741, its route is roughly similar to the modern day Dewsbury Road. Streetside Post Office is a reminder of the Roman origins of the road. The M1 motorway between Junctions 40 and 42 to the east of Ossett was opened in April 1967. The stretch from junction 38 to 40 was opened in October 1968. The Highways Agency have plans to widen the M1 to 4 lanes between Chesterfield and Leeds. In 2004 a bus station was opened in the town built by West Yorkshire Metro replacing an earlier bus station constructed in the 1970s.

The railways arrived in Ossett in 1862 when the Bradford, Wakefield & Leeds Railway company opened a branch line to Flushdyke. The line was extended to Ossett in 1864 and then onto Dewsbury and Batley. Ossett railway station, located roughly where Southdale Gardens now is, was opened in 1889 by the Great Northern Railway. The line ran underneath Station Road and the bump in the road today is the only reminder of the bridge that used to exist there until its removal in the 1980s. The railway station closed in 1964. The town was close to four other railway stations: Chickenley Heath closed in 1911, Earlsheaton in 1953, Flushdyke closed in 1941 and Horbury & Ossett in 1970. It is now the largest town in Yorkshire and one of the largest towns in Britain without a railway station. Railway sidings and yards are still to be found at the old Horbury & Ossett railway station site and Healey Mills Marshalling Yard where Queen Elizabeth II spent a night aboard the Royal Train during her 1977 Silver Jubilee tour.

In June 2009, the Association of Train Operating Companies proposed Ossett, as one of seven English towns with a strong business case for the location of a new railway station. It is likely that an unstaffed station would be erected at Healey Mills. 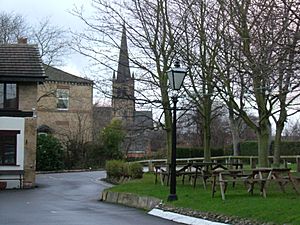 There are seven churches in the town, each with their own particular identities and initiatives. Many of the leaders of these churches meet regularly to collaborate and support each other. In the 18th and 19th centuries, the town had a reputation as a centre of religious Nonconformism. Although Nonconformist churches were common all over West Yorkshire, Ossett was a particular hotbed. In 1890, seventeen different churches were recorded in Ossett, excluding "spiritualist churches". Trinity Church is one of the two Anglican churches in the town. The other is Christ Church, South Ossett. St Mary's Church on Dewsbury Road closed in 2002, and its parish was divided between Dewsbury (Chickenley) and Ossett and Gawthorpe (Gawthorpe).

St. Ignatius Roman Catholic Church was built in 1878. The Salvation Army is the only church in Gawthorpe. The Salvation Army building also acts as a community centre providing dinners for senior citizens & two parent & toddler groups. There is also a Kingdom Hall of Jehovah's Witnesses on Ventnor Way, and a spiritualist church in the town centre.

Gawthorpe hosts the annual World Coal-Carrying Championships (Easter Monday) and an annual Maypole parade in May. Ossett Gala takes place in July. The turning on of the Christmas lights is another focal point for the community, along with the fire station's bonfire on the Friday evening nearest to 5 November. The Ossett Beer Festival takes place annually at the Brewers' Pride pub, Healey Road, Ossett over the August bank holiday weekend.

In moments of extreme anger Ossett fish-puddlers have been known to resent "thou" and reply "Don't thee thou me thee thou thissen and see how tha likes thee thouing" but this is rare.

There are four operational textile mills in the town: Ings Mill, on Dale Street, deals in recycled textiles; Burmatex Ltd, based at Victoria Mills on the Green produce carpet tiles; Edward Clay & Son Ltd, Wesley Street manufactures felts for the mattress making and horticultural industries and Wilson Briggs & Son by the River Calder off Healey Road deals with textile mill waste and remnant processing. Other have been converted into units, some of the most prominent being Royd's Mill on the Leeds Road roundabout and the large congregation of mills in the Healey area. Some mills remain derelict.

Ossett Rugby are based at Ossett Cricket and Athletic Club and play at Southdale playing fields with two men's and one senior ladies team with a girls team recently started to extend the rugby offering in the town to all ages.

Ossett hosted two semi-professional football teams, both played in the Northern Premier League Division One North: Ossett Town played at Ingfield, and neighbours Ossett Albion played at Queen's Terrace, more commonly known as Dimplewells. In February 2018, the two clubs announced an agreement to merge under the name Ossett United. For the remainder of the 2017–18 season, a season ticket at either club is valid for matches at either Ossett Albion or Ossett Town.

There was an Ossett Football Club in the 1890s, they played in the original West Yorkshire League, but the oldest current club in Ossett is Ossett Common Rovers, formed in 1910 and currently playing in the modern West Yorkshire League. Other clubs in Ossett include Ossett Wanderers, Ossett United and Ossett Panthers. Little Bull F.C., Ossett Two Brewers and AFC Two Brewers play in the Wakefield & District League.

The Yorkshire and the Humber branch of the Disability Sports Federation has its headquarters on the Longlands Industrial Estate in the town.

All content from Kiddle encyclopedia articles (including the article images and facts) can be freely used under Attribution-ShareAlike license, unless stated otherwise. Cite this article:
Ossett Facts for Kids. Kiddle Encyclopedia.