The National Coal Mining Museum for England is based at the site of Caphouse Colliery in Overton, Wakefield, West Yorkshire, England. It opened in 1988 as the Yorkshire Mining Museum and was granted national status in 1995.

Caphouse Colliery was sunk in the 1770s or 1780s and the Hope Pit in the 1820s. Sir John Lister Lister Kaye of Denby Grange took over James Milnes' leases the mineral rights in 1827 and his pits became the Denby Grange Colliery. The boiler house and stone and brick chimney at the museum are Grade II listed structures built around 1876 for Emma Lister Kaye along with the steam winding engine house, boiler yard, heapstead and ventilation shaft which are Grade II* listed. The boiler house has two Lancashire boilers and powered the winding engine. The timber headgear at Caphouse and the wood framed screens building at Hope Pit date from between 1905 and 1911. Pithead baths and an administration block were built between 1937 and 1938.

Lockwood and Elliott who owned Shuttle Eye Colliery had acquired the colliery by 1942. The colliery was nationalised in 1947 and a drift mine opened in 1974. The colliery closed in 1985. 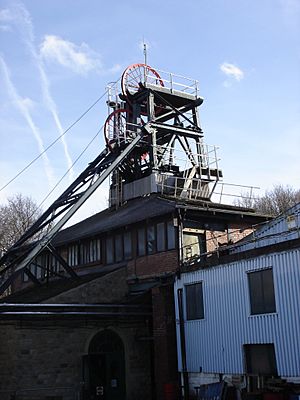 The museum offers guided underground tours where visitors can experience the conditions miners worked in and see the tools and machines they used as the industry and the mine developed through the years. Above ground there is a visitor centre which houses exhibitions on the social and industrial history of the mines. The extensive library and archive contains issues of "Coal News" and details of collieries throughout England. Other features include the pit head baths, steam winding house, boiler house and coal screening plant. It is possible to see former working pit ponies, ride the paddy train and follow the nature trail near to Hope Pit and water filtration tanks.

The museum is an Anchor Point of ERIH, the European Route of Industrial Heritage.

The museum held the exhibition 'My Mining Days' for mining artist Tom Lamb in 2008-2009.

The museum is situated on the A642, in Overton near Middlestown between Wakefield and Huddersfield. It is signposted from the M1 motorway. It can be reached by car or public transport.

The museum has occasionally featured in television programmes. In June 2005 Most Haunted Live! visited the location on Summer Solstice.

All content from Kiddle encyclopedia articles (including the article images and facts) can be freely used under Attribution-ShareAlike license, unless stated otherwise. Cite this article:
National Coal Mining Museum for England Facts for Kids. Kiddle Encyclopedia.