Kids Encyclopedia Facts
For the Anglican college, also known as Mirfield, see College of the Resurrection.

Mirfield is a town and civil parish in Kirklees, West Yorkshire, England. Historically part of the West Riding of Yorkshire, it is on the A644 road between Brighouse and Dewsbury. At the 2011 census it had a population of 19,563. Mirfield forms part of the Heavy Woollen District.

Mirfield Show is an annual agricultural event held on the third Sunday in August at Mirfield showground. It is organised and run by the Mirfield Agricultural Society (MAS) as a non-profit making event for the families of Mirfield and district.

Local residents introduced the Mirfield Food & Craft Fayre in April 2012, scheduled to be run the last Saturday of each month and "help raise the profile of Mirfield, be a benefit to local traders, businesses, organisations and charities, and add more destination events to the Yorkshire calendar". 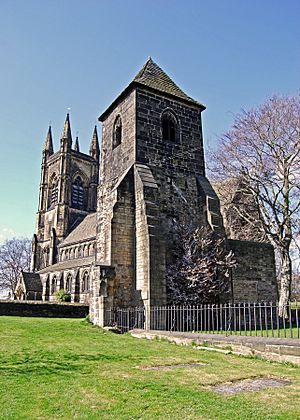 The 13th century St Mary's Church was rebuilt in 1826 but proved too small for the growing population and was regarded as too minor for the growing district. A new church, designed by Sir George Gilbert Scott, was built a few yards to the northwest, on the site of Castle Hall, a mansion then home to the families of Mirfields (sometimes spelled Mirfin), Hetons and Beaumonts. At Scott's suggestion, the tower of the earlier church, which retains some medieval work, was retained.

The College of the Resurrection is a Church of England theological college. There, Rowan Williams, later the Archbishop of Canterbury, lectured from 1975 for two years and Archbishop Trevor Huddleston spent his last days.

During the 18th century, a canal was constructed through the town linking the River Calder with other rivers in the area. The canal is part of the Calder and Hebble Navigation. Its construction resulted in many industries in Mirfield, such as the textiles and boat yards. The canal is still in use for recreational users, with a high popularity of the past time "duck feeding" being present along the waters edge.

Mirfield is the base of the Safe Anchor Trust, a charity founded in 1995 to provide canal boat trips for vulnerable and special needs people. In 2012, Princess Anne commissioned a new boat for the Trust.

There are many national businesses based in Mirfield including John Cotton Group Ltd and Furniture And Choice.

The town has a variety of local independent shops as well as national chains such as Lidl, Tesco and Co-op Food.

Primary schools include Battyeford CE Primary School, Crossley Fields, Old Bank, Hopton Primary School and Crowlees Junior and Infant School, all of which were assessed by Ofsted as 'Grade 1 – Outstanding' in the March 2007 inspection.

The Mirfield Petanque Club who currently play in the West Yorkshire Petanque League and are also based at the Memorial Park.

All content from Kiddle encyclopedia articles (including the article images and facts) can be freely used under Attribution-ShareAlike license, unless stated otherwise. Cite this article:
Mirfield Facts for Kids. Kiddle Encyclopedia.