Halifax is a major bank in the United Kingdom. It was a building society, but 'demutualised' and became a bank. Halifax then merged with the Bank of Scotland and made up HBOS. In 2009, HBOS merged with Lloyds TSB and made Lloyds Banking Group. Until 2010 Halifax was also an estate agent.

The Halifax started in 1853 as the Halifax Permanent Benefit Building and Investment Society at the Old Cock Inn in Halifax, West Yorkshire. The building society was created to allow working-class people in Halifax to invest their money in a local and 'mutual' organisation.

In 1995 the Halifax merged with the Leeds Permanent Building Society, this new larger building society then bought out Clerical Medical Find Managers.

In 1997 the Halifax became a bank and registered with the London Stock Exchange.

By 1997 the Halifax was the fifth largest bank in the United Kingdom and had joined the 'big four' to make it a 'big five'.

In January 2009 HBOS was acquired by Lloyds TSB which subsequently became Lloyds Banking Group. The Halifax is now just a brand name used by this group. 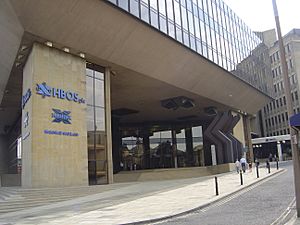 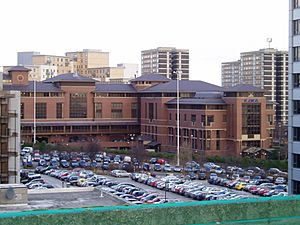 The bank has its main offices in Halifax town centre. It also has other major offices in Copley (near Halifax) and Leeds The Leeds offices used to belong to the Leeds Permanent Building Society. There are also offices in Aylesbury, Nottingham and Buckinghamshire.

Now the Halifax is part of Lloyds Banking Group there are also many former Lloyds, Bank of Scotland and TSB offices. Some services have been centralised, leading to job losses at some offices.

It was announced on June 30th 2010 that the Nottingham office is to close at the end of 2011. It has been confirmed by banking officials from Lloyds that a total of 198 jobs will be lost as a result.

The Halifax has branches all over the United Kingdom and also has 44 in Ireland (although these are to close). Many Halifax branches used to belong to the Leeds Permanent Building Society, which was taken-over by the Halifax in 1995.

All content from Kiddle encyclopedia articles (including the article images and facts) can be freely used under Attribution-ShareAlike license, unless stated otherwise. Cite this article:
Halifax (bank) Facts for Kids. Kiddle Encyclopedia.