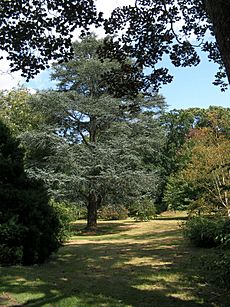 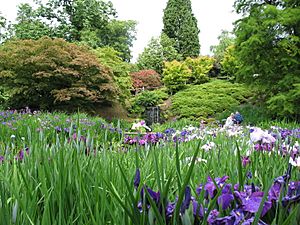 Wakehurst, previously known as Wakehurst Place, is a house and botanic gardens in West Sussex, England, owned by the National Trust but used and managed by the Royal Botanic Gardens, Kew. It is near Ardingly, West Sussex in the High Weald (grid reference TQ340315), and comprises a late 16th-century mansion, a mainly 20th-century garden and, in a modern building, Kew's Millennium Seed Bank. Visitors are able to see the gardens, the Mansion, and also visit the seed bank. The garden today covers some 2 km2 (490 acres) and includes walled and water gardens, woodland and wetland conservation areas.

RBG Kew has leased the land from the National Trust since 1965 and much has been achieved in this time, from the Millennium Seed Bank project and the creation of the Loder Valley and Francis Rose Nature Reserves to the introduction of the visitor centre, the Seed café and Stables restaurant along with the development of the gardens.

Wakehurst is listed Grade I on the National Heritage List for England, and its gardens are listed Grade II* on the Register of Historic Parks and Gardens.

The mansion was built by Sir Edward Culpeper in 1590. It originally formed a complete courtyard prior to being altered various times, and currently has an E-shaped plan. Wakehurst was bought in 1694 by Dennis Lyddell, comptroller of the Royal Navy treasurer's accounts and briefly MP for Harwich. His son Richard Liddell, Chief Secretary for Ireland and MP for Bossiney, was obliged by financial pressure to pass the estate to his younger brother Charles.

The house was illustrated in Joseph Nash's The Mansions of England in the Olden Time (1839–49).

The gardens were largely created by Gerald Loder (later Lord Wakehurst) who purchased the estate in 1903 and spent 33 years developing the gardens. He was succeeded by Sir Henry Price, under whose care the Loder plantings matured. Sir Henry left Wakehurst to the nation in 1963 and the Royal Botanic Gardens took up a lease from the National Trust in 1965.

Wakehurst is home to the National Collections of Betula (birches), Hypericum, Nothofagus (Southern Hemisphere beeches) and Skimmia. The Great Storm of 1987 decimated Loder's plantings, toppling 20,000 trees. Since then, Kew has redesigned the gardens to create a walk through the temperate woodlands of the world.

Nearby, also cared for by Kew, are the Loder Valley Nature Reserve of woodland, meadowland and wetland habitats, and the Francis Rose Reserve, the first devoted to cryptogams (mosses, lichens and ferns).

Wakehurst is home to the largest growing Christmas tree in England, a giant redwood. The tree stands 35 m (115 ft) tall and is lit with around 1,800 lights from Advent until Twelfth Night. The lightbulbs on the tree were changed in 2006 to energy-saving lightbulbs, so the tree is not as bright as before but uses less energy.

All content from Kiddle encyclopedia articles (including the article images and facts) can be freely used under Attribution-ShareAlike license, unless stated otherwise. Cite this article:
Wakehurst Place Facts for Kids. Kiddle Encyclopedia.