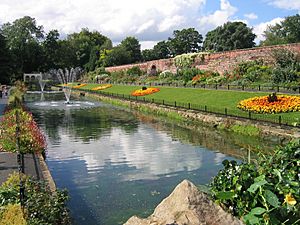 Roundhay Park is a large park in the upmarket suburb of Roundhay in North Leeds. The park is home to two lakes, the Waterloo Lake and the Upper Lake. The Park is also home to Roundhay Mansion, Roundhay Castle and Tropical World.

Roundhay Park was a private hunting ground in the thirteenth century. Thomas Nicholson bought the park in 1803 and in 1811 had John Clarke redesign it as a private park. At the same time the Roundhay Mansion was built. In 1871, the park was bought by Leeds City Council for use by the public. The decision to buy the park was not a popular one, with many people seeing it as a waste of money because the park was so far away from Leeds City Centre. The city grew though in later years through the industrial revolution and the city's rich residents built houses close to the park. 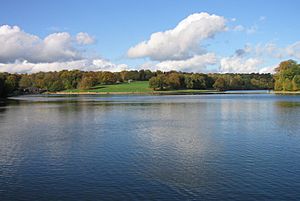 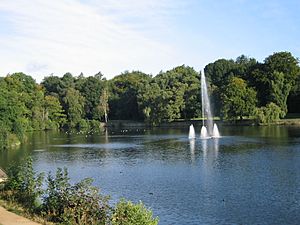 The main lake, Waterloo Lake was built by soldiers after their return from the Napoleonic Wars after the Battle of Waterloo. The lake is 60 ft (18 m) deep and 33 acres (13 ha) in area. It was originally used for boating, but now only fishing. In the twentieth century the boat house was made into a cafe. Until 1900 a steamboat called the Maid of Athens ran on the lake. The dam at the south end was once a waterfall.

The park has seen many concerts, including Party at the Park, a Madonna concert and more recently a Robbie Williams concert.

All content from Kiddle encyclopedia articles (including the article images and facts) can be freely used under Attribution-ShareAlike license, unless stated otherwise. Cite this article:
Roundhay Park Facts for Kids. Kiddle Encyclopedia.