Overton is a village between Wakefield and Huddersfield in West Yorkshire, England. The village is situated approximately 5.5 miles (9 km) south-west of Wakefield, 4 miles (6 km) south of Ossett, 1 mile (1.6 km) west of Netherton and 4 miles south-west of Horbury. Overton is conjoined at its northeast to the larger village of Middlestown. Coxley Woods are less than 1 mile (1.6 km) to the southeast.

Overton was historically called 'Over Shitlington', and was one of four villages in the township of 'Shitlington' in the civil parish of Thornhill. In 1881 Overton was in the county court district and Poor Law Union of Wakefield. Village occupations at the time included two farmers, a shopkeeper, the manager of "Cap House pit," and the landlords of The Reindeer and The Black Swan public houses. Shitlington was officially changed to Sitlington in 1929. 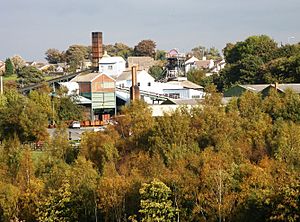 St Luke's Parish Church in Overton is part of the ecclesiastical parish of Middlestown with Netherton.

Overton is significant for the National Coal Mining Museum, situated on the A642. The former Caphouse Colliery was worked from at least 1789 until the coal was exhausted in 1985 when work was started to convert it to a museum.

All content from Kiddle encyclopedia articles (including the article images and facts) can be freely used under Attribution-ShareAlike license, unless stated otherwise. Cite this article:
Overton, Wakefield Facts for Kids. Kiddle Encyclopedia.