Kids Encyclopedia Facts
This page is about the Yorkshire town. For other uses, see Featherstone (disambiguation).

Featherstone is a town and civil parish in the City of Wakefield, West Yorkshire, England, two miles south-west of Pontefract. Historically part of the West Riding of Yorkshire, in 2011 it had a population of 15,244. Featherstone railway station is on the Pontefract Line.

Despite most population growth taking place around the Industrial Revolution, Featherstone traces its history back much further than this. The Domesday Book (1086) records "In Ferestane [Featherstone] and Prestone [Purston] and Arduwic [Hardwick] and Osele [Nostell], Ligulf had 16 carucates of land for geld, and 6 ploughs may be there." It is thought that a local public house, the Traveller's Rest, can trace its origins to the 17th century whilst the Jubilee Hotel is a listed building which once provided a resting place for wealthy Victorians and their horses.

Like many surrounding areas, Featherstone grew around coal mining. Coal had been mined at Featherstone since the 13th century and remains of bell pits can still be seen to the north of Park Lane at North Featherstone. In 1848, the opening of the Wakefield, Pontefract and Goole railway line through Featherstone provided the basis for large scale coal mining in Featherstone, by opening up new markets in the South of England and Europe.

The town came to national attention during a national "lockout" of mine workers in 1893 due to low coal prices and overproduction. Soldiers fired on a crowd who were demonstrating at the colliery gates, killing two. A distinctive sculpture marking the centenary of the Featherstone Massacre stands in the shopping precinct and a large mural depicting the town's heritage can be seen at the town's main crossroads. Ackton Hall Colliery was the first pit to close following the end of the miners' strike and this could not be contested as geological difficulties had made it impossible for the pit to continue production.

Featherstone is the subject of a study, Coal is Our Life, by the sociologist Norman Dennis, published in 1956.

Opened in the 1950s, Purston Park takes up a large area of space and offers a lake and a children's play area. There was also previously a bowling green, until being changed to a rose garden in 2004. It has been made out of the grounds of what was originally a private residence and a country estate, with the stately home formerly acting as the town hall. This building was sold to developers in 2007 and has since been converted into luxury flats.

Featherstone is undergoing continual change and as part of this a new, state-of-the-art £2.5-million community centre has been built in Station Lane. The "Pit Houses", the houses constituting a council estate which formerly belonged to the National Coal Board, have been demolished to make room for further developments.

Like many place-names in the area, 'Featherstone' derives from Old English. The name is formed of two elements: feother, meaning 'four', and stān, meaning 'stone'. Therefore, the names means "(place at) the four stones". These 'four stones' are likely to have been some waymarker or monument by a road or other well-used route through the town. The settlement was recorded in the Domesday Book of 1086 as Fredestan.

Starting in the mid-1970s to the mid-1980s, the area went into an era of sharp decline in the residents' quality of life. Historians and social scientists have put forward many factors. The gradual loss of the coal industry coupled with poor housing and education. This has begun to improve in recent years with new housing developments, better schools and plans to breathe life back into the local business community via various climate friendly projects. 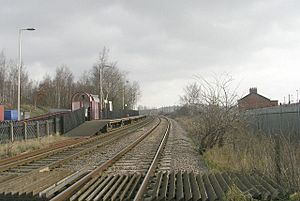 Featherstone has a railway station on the Pontefract Line. There are also bus services operated by Arriva Yorkshire and Ross Travel. The M62 lies close by. 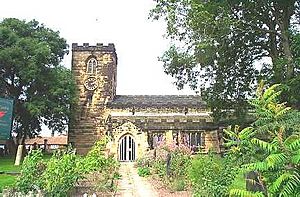 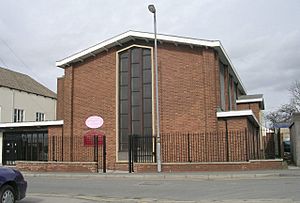 Featherstone has a number of churches: St Thomas's Church (Anglican) – built from traditional Yorkshire sandstone, St Thomas's Church and the adjacent vicarage were built in the 1870s. Due to a lack of funding the church has no bell tower, and instead the bell hangs outside on the church’s south wall. The original vicarage is now a private residence. All Saints' Church (Anglican), the Methodist church, and the South Featherstone Gospel Hall are also still active churches.

A former Methodist chapel on Wakefield Road has since been turned into an antiques salesroom and the North Featherstone Gospel Hall has been converted into a private dwelling. St Gerard's Roman Catholic Church was closed in the summer of 2008 – meaning Catholics now have to travel to Pontefract to attend services.

It is believed that heroic outlaw Robin Hood (possibly Robyn Hode in older manuscripts), a highly skilled archer and swordsman, spent much of his time in the area. Evidence suggests that he may have used the Travellers Rest tavern in Purston Jaglin as his base in the region. Although not part of his original character, since the beginning of the 19th century he has become known for robbing from the rich and giving to the poor, assisted by a group of fellow outlaws known as his Merry Men. 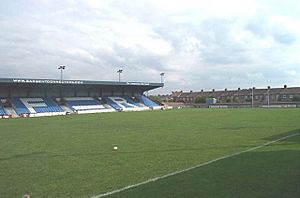 The town's sport scene is dominated by its local rugby league club, Featherstone Rovers, who have won the Challenge Cup on three occasions, most recently on 7 May 1983, and won the League Championship in 1976–77. Originally made up of local miners, the club was formed in the Railway Hotel in 1902, then re-formed in 1906. They are currently in the Championship, after being promoted in 2007, beating Oldham in the Play-Offs final. In the 2010 season, Rovers finished first in the league table with a 100% away record and claimed the League Leader's Shield. They reached the Championship Grand Final by beating Halifax 46–16 in the Semi-Final, only to be defeated by Halifax in the final on a golden point (22–23). They went one better in 2012 beating Sheffield Eagles 44–4 in the Grand Final to become Champions.

Featherstone Rovers' stadium (historically known as Post Office Road) was renamed the LD Nutrition Stadium in 2017, following a sponsorship deal with a local health-food dealer of the same name. The Stadium was previously known as the Bigfellas Stadium (as named in 2010) due to sponsorship at the time being from the Pontefract nightclub of the same name.

The community side Featherstone Lions also hails from the town and currently play their home games from their base, Mill Pond Stadium. Featherstone Lions have open age men's teams that play in the National Conference League Yorkshire Men's League they also have junior teams from U7-U18 both boys and girls along with a women's open age side.

Formed in 1958 by Allan Whitworth, who once deadlifted 600lbs, The club amalgamated in 1959 with Pontefract Weightlifting club ran by Jack Garbutt a future World Masters champion and his brother Len Garbutt who would later become a Featherstone Mayor. This club had existed since the 1940s and make Featherstone Weightlifting club the second oldest members club in Britain. The club has had many international champions and medallists and British records holders including Jack Garbutt, Tony Flood, Les D'Arcy, Martyn Riley. In recent times the club has developed a great reputation for coaching local children and the Featherstone Raptors, coached by the team of Founder Martyn Riley and recently Justine Davis, Robert Jackson, Stefanie Carter, Thomas Smith, S.Tepper and Si Walker as they often have more entrants, medallists and winners than the much bigger city clubs at events. This includes 4 time British Development champion Kobain Riley and multiple time regional and national champions Lea Saka Fajic, Olivia Walker, Jack Hawkins, Wesley Riley, Kian Riley, Len Fajic, Kara Swailes, Oliver Tepper, Mackallan Whiteley, Lilly Tepper, Blake Rowlands, Chloe Hutchinson and Casey Swailes still training at the club. Recently the club also had more entrants, medallists and champions at the English senior, masters and development Championships 2019 in Milton Keynes and was awarded for there work in the community at the WMDC love where you live awards.

Martyn Riley is the only ever autistic European champion at Weightlifting and won gold in 2017, 2020 and silver in 2019!

All content from Kiddle encyclopedia articles (including the article images and facts) can be freely used under Attribution-ShareAlike license, unless stated otherwise. Cite this article:
Featherstone Facts for Kids. Kiddle Encyclopedia.