Cottingley is a suburban village within the City of Bradford in West Yorkshire, England between Shipley and Bingley. It is known for the Cottingley Fairies, which appeared in a series of photographs taken there during the early 20th century. 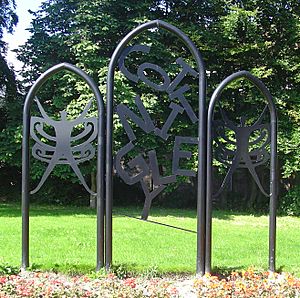 The village lies in the Aire Valley between Shipley and Bingley approximately 100 metres above sea level. To the north is the A650; Cottingley was formerly on the main road before the highway was built from the Bridge to Bingley in 1825. The land to the east of the B6269 is mainly flat and that to the west rises to a height of 170 metres at March Cote Farm. Cottingley beck cuts a deep, narrow, rocky channel flowing north to the River Aire.

The area lies on Millstone Grit; the lower slopes are covered with boulder clay and some alluvial deposits; there are also signs of glacial drift. Crow Coal mixed with Galliard of approximately 75 ft in thickness was found in the area. To the south it again had coal measures. Old mine shafts litter the fields either side of Cottingley Cliffe Road. These are shown as either Old Coal Pits or Coal pits on the 1852 map of the area, which seems to suggest that some were still being worked in 1852.

All content from Kiddle encyclopedia articles (including the article images and facts) can be freely used under Attribution-ShareAlike license, unless stated otherwise. Cite this article:
Cottingley, Bradford Facts for Kids. Kiddle Encyclopedia.