Denholme is a town and civil parish in the Bradford Metropolitan Borough, West Yorkshire, England. It is 8 miles (13 km) west of Bradford, 7 miles (11 km) from Keighley and roughly the same distance from Halifax. Administratively, it is part of the Bingley Rural ward of the City of Bradford. Denholme has a population of 2,976, increasing to 3,489 at the 2011 Census.

The name Denholme is probably of Viking origin, translating to "A flat amongst the hillside". This is a good description of the village's geographical setting, since it is located in a broad side valley extending southwards from that of the River Aire - the Aire Valley or Airedale. However, an alternative suggestion of the word "Holme", in old Viking Danelaw, would be that of reclaimed marshland (or an "island" in a wet area) and Den or Denu, in Old English, means Valley. This would also make sense given the areas many springs, marshy terrain and being situated in a valley. Denholme is also on the eastern flank of the Pennines, commonly known as the "backbone of England", about midway along their length.

The village sits astride the old Roman Road from Manchester (Mamucium or Mancunium) to Ilkley (Olicana) though there is no evidence of any settlement then. The line of the road is visible on the ground to the south of the village, not far from St Paul's church.

The first evidence of habitation in the area dates from the 13th century. There is a grant of land, dated 1239, whereby Thomas de Thornton gave grazing land at Denholme to the monks of Byland Abbey. It is likely that the monks would have built a grange in the area and this may well have given the village its first occupants.

Denholme had a working railway station from 1 January 1884. It closed to passengers on 23 May 1955 and closed completely on 10 April 1961 when sometime after most of its buildings were demolished. The railway was built by the Great Northern Railway and linked Bradford, Keighley and Halifax via a triangular junction at Queensbury. The lines and station transferred to the LNER and, ultimately, to British Railways (North Eastern Region) at closure. At 850 ft above sea level, Denholme was the highest station on the entire GN system. The line was mostly rural and needed the construction of many earthworks, viaducts and tunnels. Its hilly nature earned it the nicknames of "the Alpine route" or "the switchback" from its drivers.

The original mills around the which the village grew have now gone, though their sites have been partially re-used for light industry. Recent years have seen the closure of the bulk of the remaining manufacturing industry in the village, including specialised textiles, joinery and constructional timber. Whilst there are still employment opportunities in the shops, schools and other village services, or on the surrounding farms, the majority of working residents now commute to Bradford, Keighley, Halifax or Leeds. 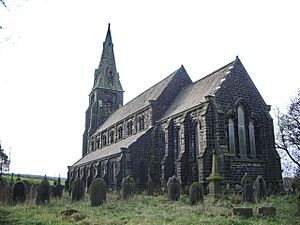 Denholme has three churches, a Methodist church, a Catholic church, and Denholme Shared Church (incorporating Denholme Edge United Reformed/Baptist Church and St. Paul's, Church of England). There is also a library in the Mechanics Institute, and a Conservative Social Club. Services include a doctor's surgery, a pharmacy & sheltered housing. There is also a public park - Foster Park - which was given to the people of Denholme in 1912 by William Foster.

The village has a selection of shops - food, non-food and fast food, two pubs - the Royal and the New Inn, a Post Office, a charity shop and a farm shop. Foster Park houses a youth cafe, skate area, basketball court, bowling green and the village War Memorial. Just to the east of Denholme is Doe Park Reservoir where there is fishing, a water activities centre and a sailing club.

The main road running through Denholme is the A629. The town is on regular bus routes between Keighley and Bradford and with occasional services to Halifax.

There is a Children's Gala (fair) every year held in Foster Park, usually held on the first Saturday of July.

Denholme Primary School has a good reputation. The neighbouring hamlet of Keelham also has a primary school and some children from the town attend there. The nearest high school is Parkside School, Cullingworth, just over 2 miles away.

All content from Kiddle encyclopedia articles (including the article images and facts) can be freely used under Attribution-ShareAlike license, unless stated otherwise. Cite this article:
Denholme Facts for Kids. Kiddle Encyclopedia.