County Hall or West Riding County Hall stands at the corner of Bond Street and Cliff Parade in Wakefield, West Yorkshire, England. It is the main headquarters of Wakefield Metropolitan District Council. It is a Grade I listed building.

The County Council of the West Riding of Yorkshire was created by the Local Government Act 1888. Its jurisdiction was over a new administrative county covering the West Riding of Yorkshire excluding a number of county boroughs. Its first meeting was held in February 1889 in Wakefield Town Hall, at the invitation of the Borough Council. For a permanent home the choice was between Leeds and Wakefield; much debate and correspondence resulted, in 1892, in the choice of Wakefield.

The site chosen for the new County Hall was that of Rishworth House on Bond Street, a gentleman's house of 1812 bought by the West Riding Quarter Sessions in 1878. The County Council had received Rishworth House at its creation and used it for committee rooms, offices and a residence for the Deputy Clerk.

In commissioning a new home, the County Council held an open architectural competition, instructing competitors to prefer "the style of architecture will be left to the competitors but the Queen Anne or Renaissance School of Architecture appears suited to an old town like Wakefield". The winning design was by James S Gibson, who proposed a Gothic design. Apart from minor modifications, such as the installation of electrical lighting his plan was effected. Later a tower was added to the plan.

The contract for the building of the hall, with Messrs. Armitage and Hodgson of Leeds contained a fair wages clause and a ban on subcontracting to employees in sweated trades.

County Hall was built in the four years from 1894 and opened by the Marquess of Ripon on 22 February 1898.

New wings were added to the original building between 1912 and 1915 by George Crook of Wakefield, but seamlessly matching Gibson's original design.

The site chosen for County Hall was a constricted one; the rhombus formed by Bond Street, Cliff Parade, Burton Street and Bell Street. Maximum use of the site meant that the building immediately fronts the streets, with no room for a grand portico entrance. Instead, Gibson placed the main entrance at the obtuse-angled corner of Bond Street with Cliff Parade.

The Council Chamber was placed on an upper storey and in the centre of the building, so as to minimize noise from the street.

The interior decoration is largely by Henry Charles Fehr. It is a library of symbolism, for which Fehr was justly famous.

On the main staircase for example an Owl and the Scales represent Meditation and Justice, against which recline two winged figures of Debate and Dictation. The Seal of the West Riding County Council hangs each side. A second panel contains implements representing the main industries of the West Riding, surrounding the White Rose of York, all entwined by a serpent symbolising Wisdom, crowned with a spray of oak for Independence, while beneath the honesty plant and flax are interwoven for Honesty and Industry.

Two further panels show Peace (a winged figure resting on an olive tree with ingrafted roses and sheltering a wren, doves in the tree and broken swords below) and Plenty (a winged figure seated on a golden throne with arms outstretched over divers fruit and grain).

In 1913 a delegation from a joint committee of Middlesex County Council and the Middlesex Quarter Sessions visited Wakefield and forthwith commissioned a copy of the Council Chamber for their own new Middlesex Guildhall. 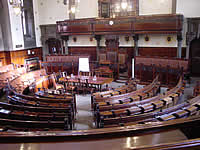 Wakefield City Council effected a major refurbishment of County Hall after acquiring it, costing over £3 million. On 19 February 1991, the then Leader of the Council, Councillor John D Pearman, unveiled a plaque to mark not only the acquisition of the building but also its major refurbishment.

All content from Kiddle encyclopedia articles (including the article images and facts) can be freely used under Attribution-ShareAlike license, unless stated otherwise. Cite this article:
County Hall, Wakefield Facts for Kids. Kiddle Encyclopedia.