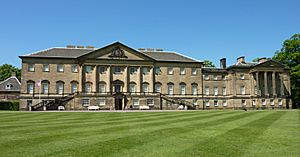 Nostell Priory (referred to by the National Trust simply as Nostell) is a Palladian house located in Nostell, near Crofton close to Wakefield, West Yorkshire, England, approached by the Doncaster road from Wakefield. It dates from 1733, and was built for the Winn family on the site of a medieval priory. The Priory and its contents were given to the National Trust in 1953 by the trustees of the estate and Rowland Winn, 3rd Baron St Oswald. 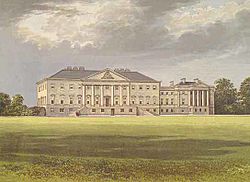 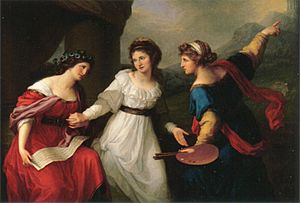 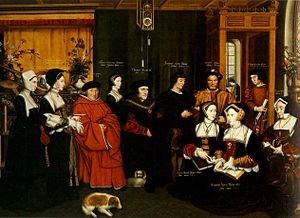 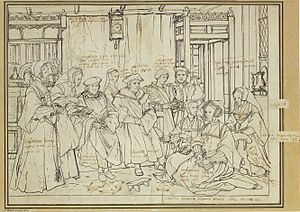 Study for a portrait of Thomas More's family, c. 1527, by Hans Holbein the Younger (Kunstmuseum Basel) 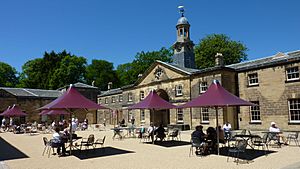 The property was owned by the Gargrave family after being purchased in 1567 by Sir Thomas Gargrave, Speaker of the House of Commons from James Blount, 6th Baron Mountjoy, for £3,560.

The estate was purchased in 1654 by the London alderman, Sir Rowland Winn, after the owner was declared bankrupt in 1650. Construction of the present house started in 1733, and the furniture, furnishings and decorations made for the house remain in situ. The Winns were textile merchants in London, George Wynne of Gwydir was appointed Draper to Elizabeth I, his grandson, Sir George Winn was created 1st Baronet of Nostell in 1660 and the family subsequently owed its wealth to the coal under the estate, and later from leasing land in Lincolnshire for mining iron ore during the Industrial Revolution.

The house was built by James Paine for Sir Rowland Winn 4th Bart on the site of a 12th-century priory dedicated to Saint Oswald. Robert Adam was commissioned to design additional wings, only one of which was completed, and complete the state rooms. Adam added a double staircase to the front of the house, and designed buildings on the estate, including the stable block.

Nostell Priory is home to a large collection of Chippendale furniture, all made for the house and commissioned by Sir Rowland Winn 5th Bart and his wife Sabine Winn. Thomas Chippendale was born in Otley in 1718 and had workshops in St Martins Lane, London. The Nostell Priory art collection includes The Procession to Calvary by Pieter Brueghel the Younger, William Hogarth's Scene from Shakespeare's The Tempest - the first depiction in a painting of any scene from Shakespeare's plays - and a self-portrait by Angelica Kauffman, as well as Rowland Lockey's copy of the painting by Hans Holbein (c1527 but now lost) of Sir Thomas More and Family; this copy was commissioned in 1592 by the More family and came to Nostell in the 18th century, and is said to be the most faithful to the destroyed original.

A longcase clock, with an almost completely wooden internal mechanism, made by John Harrison in 1717, is housed in the billiard room. Harrison, whose father Henry is thought to have been an estate carpenter, was born within half a mile of the estate. He was referred to as John "Longitude" Harrison, after devoting his life to solving the problem of finding longitude at sea by creating an accurate marine timekeeper. Known as H4, this chronometer can be seen at the Royal Observatory, Greenwich, London.

In August 1982 there was a music festival there, sponsored and organized by Theakston's Brewery which was a great success. Two years later in 1984 there was another festival organized by a different group of people. Although this event was a commercial festival, the "Convoy" was involved in organising a free festival next to it. Riot police were mobilised to suppress this aspect of the event.

In May 2007, a set of Gillows furniture returned to the house after refurbishment. These pieces now furnish the tapestry room, as do a pair of large Venetian vases, made of wood inlaid with ivory and semi-precious stones.

The Adam stable block has undergone major renovation and is now open as a visitor centre for house and parkland.

In June 2009 a suite of bedrooms on the second floor was handed to the National Trust. These bedrooms used by the Winns, had never been on public view before. They contain the original contents, including a regency fourposter bed and suite of Victorian bedroom furniture. Another room open to visitors is the butler's pantry, with a display of Winn family silver, in the adjacent strongroom cabinets. 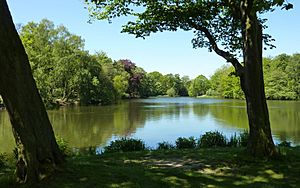 The Lower Lake at Nostell Priory 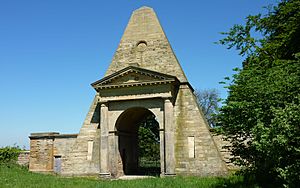 Nostell Priory occupies 121 hectares (300 acres) of parkland. Within the grounds and gardens are lakeside walks. The main facade of the house faces east towards a grass vista. Leading to the lake on the west side of the house is the west lawn. The parkland has lakeside and woodland walks, views of the druid's bridge and walks to the restored Obelisk Lodge, a parkland gatehouse, through wildflower meadows. The park was purchased from Lord St Oswald by the National Trust with funding from the Heritage Lottery fund. This grant enabled the trust to acquire pictures, books, and furniture from the family.

The Obelisk Lodge was built in the 17th century and inhabited until the late 1950s.

The main lawn and the lower fields to the east of the Priory have been used for various large and small events over the years, however it was "Central Yorkshire Scout County" in 2000 that provided a fundamental change to how the grounds could be used. The organisation chose Nostell Priory as the site for its year 2000 "Millennium Camp", which was to attract around 2500 people from across the Yorkshire Scouting movement. During the 12-month preparation project to create temporary facilities and infrastructure, Yorkshire Water employee Jon Potter persuaded his employers to donate/install a subterranean high-pressure water mains and stand-pipe points around the entire eastern grounds. This was unprecedented both in terms of a corporate donation and in its benefit to the Priory, which up to that point had been considering how they could self-fund exactly this improvement.

In 2012 the BBC reported that planning permission had been granted for a new operating base for the Yorkshire Air Ambulance. The new site, including a hangar and aircrew accommodation, was operational by summer 2013. It replaced the previous facility at Leeds/Bradford Airport.

The priory was a 12th-century Augustinian foundation, dedicated to St Oswald, supported initially by Robert de Lacy of Pontefract, and Thurstan of York. By about 1114, Aldulf, confessor to Henry I of England, was prior of a group of regular canons at Nostell.

Sir John Field, the first Copernican Astronomer of note in England, is believed to have studied at Nostell in his youth under the tutelage of Prior Alured Comwn.

As part of the Dissolution of the Monasteries, the priory was seized and depredated in 1540. After the dissolution the lands of the priory came into the possession of Sir Thomas Gargrave, a High Sheriff of Yorkshire, Speaker of the House of Commons and president of the Council of the North.

All content from Kiddle encyclopedia articles (including the article images and facts) can be freely used under Attribution-ShareAlike license, unless stated otherwise. Cite this article:
Nostell Priory Facts for Kids. Kiddle Encyclopedia.