Kids Encyclopedia Facts
Not to be confused with Eland.

Elland is a market town in Calderdale, in the county of West Yorkshire, England. It is situated south of Halifax, by the River Calder and the Calder and Hebble Navigation. Elland was recorded as Elant in the Domesday Book of 1086. It had a population in 2001 of 14,554, with the ward being measured at 11,676 in the 2011 Census.

Mentioned in the 1086 Domesday Book as Elant, Elland retained continuity of tenure from before the Norman Conquest into the Middle Ages, as the Elland family were descended from Anglo-Saxon thegns. The Manor of Elland, with Greetland and Southowram formed an island of the Honour of Pontefract in the surrounding Manor of Wakefield. In 1350 Sir John de Eland was murdered, as were his son and grandson in the following year, which extinguished the male line of the family and the manor passed to the Savile family. From this period, the manor house ceased to be the principal dwelling of a gentry family, as the Saviles had their seat at the moated manor of Thornhill. Elland manor house was never completely reconstructed and, when dismantled and excavated in 1975 by the West Yorkshire Archaeology Unit, it was found to incorporate a 13th-century solar wing – one of the earliest secular buildings in the county. The manor house stood on a knoll aligned with the bridge over the River Calder and was destroyed during the construction of Calderdale Way bypass. The farm buildings survive. 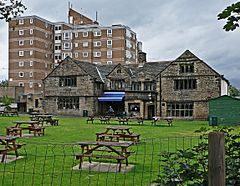 At the request of John de Warenne, 7th Earl of Surrey, Edward II granted a charter, to John de Eland, for a free market on Tuesday at his Manor of Elland, and two fairs.

The town became a centre of wool production. The decline of the woollen industry had a significant effect on the town and many mills were demolished or converted to residences.

Durable flagstones, Elland flags, were quarried near the town and after the canal was constructed, they could be transported economically all over the county. Elland housed the main factory of the manufacturer of Gannex products and is the home of the Dobsons sweet factory, which produces traditional boiled sweets. Since 2001, Elland has been home to Suma Wholefoods, the largest workers' co-operative in the United Kingdom. 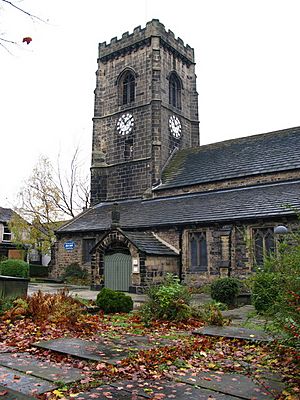 The church of St Mary the Virgin

Buildings of interest include the parish church of St Mary the Virgin, the former Rose and Crown Inn in Northgate, the Old Town Hall, Southgate Methodist Church, the reputedly haunted Fleece Inn at the top of Westgate, the Rex Cinema and Waxman ceramics on Elland Lane. The remains of the medieval stocks can be found at the junction of Southgate and Elizabeth Street. 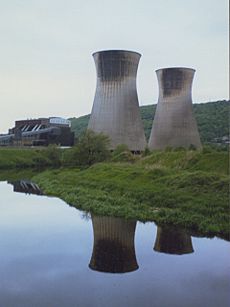 Elland Power Station was a coal-fired power station by the River Calder. It was decommissioned and closed in 1991, in keeping with the trend of generating power at fewer but larger power stations away from towns, and demolished in 1996.

The Calder and Hebble Navigation opened in the late-18th century to serve the growing industrialisation of the Calder Valley. Elland railway station closed in 1962 but the line is still in use as a passenger service for the Caldervale Line. The station has been proposed for re-opening with direct services to Leeds, Bradford, Halifax and Huddersfield.

The A643 road begins in Leeds and ended in Elland. It passes Leeds United AFC's football ground, Elland Road. It now ends at junction 23 of the M62 motorway.

All content from Kiddle encyclopedia articles (including the article images and facts) can be freely used under Attribution-ShareAlike license, unless stated otherwise. Cite this article:
Elland Facts for Kids. Kiddle Encyclopedia.