The building was designed by Lockwood and Mawson, and opened in 1873.

Winston Churchill gave his first speech after the Second Battle of El Alamein outside the hall in which he called for the people to 'go forward together and put these grave matters to the proof'.

Before its relocation, between 1847 and 1872, the town hall had been the Fire Station House in Swain Street. In 1869, a new triangular site was purchased, and a competition held for a design to rival the town halls of Leeds and Halifax. The local firm of Lockwood and Mawson was chosen over the other 31 entries. It was built by John Ives & Son of Shipley and took three years to build at a cost of £100,000. It was opened on 9 September 1873, on a very wet day by Matthew Thompson, the mayor.

It was first extended in 1909 to a design by Norman Shaw and executed by architect F.E.P. Edwards, with another council chamber, more committee rooms and a banqueting hall. It was extended again in 1914 with a new entrance and staircase in baroque marble by William Williamson and listed grade I on 14 June 1963.

In 1965 the name was changed to City Hall to reflect Bradford's prominence, and the building was improved at a cost of £12,000. In 1992 the bells stopped due to decay of the bell frame; in 1997 the bells were repaired with National Lottery funds.

In December 2007 the City Hall went green by turning the city's nine Christmas trees into woodchips as fuel for new heating boilers to be installed in early 2008. An access tunnel was dug from the roadway to install the boilers: there is a Powerpoint description of the process, with images of the old and new boilers, here. 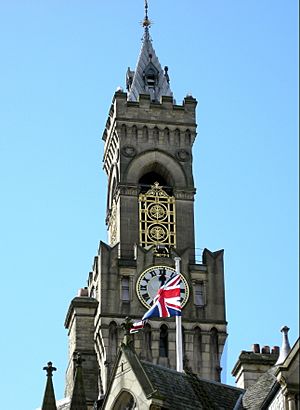 The two flagpoles carry the flag of Wales on Saint David's Day and the flag of Australia on Australia Day. Flag use in response to major world disasters is made according to Government guidelines. The flags also reflect royal events, such as coronations and weddings.

The building is set in Centenary Square, which was developed and pedestrianised in 1997, the city's centenary. Staff give tours of the building on request. Annually in September the City Hall holds a heritage weekend, when visitors can see more of the building. During two special open days per year, 1,200 children are invited to meet the mayor, learn about the building and the council, do re-enactments and gain civic pride. In 2000, Barbara Jane Harrison was commemorated in a memorial display in the City Hall. In October 2006 the building was illuminated for Bradford Festival by artist Patrice Warrener. In 2007 the City Hall filled in for Manchester Crown Court for the duration of the trial of Tracy Barlow in Coronation Street. 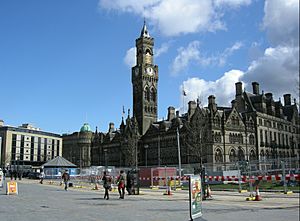 The bells have played "The Star-Spangled Banner" to mark the three minutes' silence for those who died due to terrorism. When an eminent Bradfordian dies, the City Hall flags fly at half mast until the funeral is over, while the minute bell rings for an hour after receipt of notice, and for an hour at the time of the funeral. At the memorial in 2005 of the 1985 Bradford City stadium fire, "Dozens of people broke down in tears as the City Hall bells played You'll Never Walk Alone and Abide with Me in tribute to the victims."Telegraph, 11 May 2005. However the bells normally play happier tunes, and in 2001 there was talk of replacing the old computer application which controlled the bells, so that they could play pop music. The bells can now be programmed to play any tune, subject to musical arrangement and technical limitations. The bells have played No Matter What several times in 2001, when Whistle Down the Wind was playing at the Alhambra; the operator of the bells was able to see the theatre steps from the bell tower, and timed the peals with the audience's exit. This meant that the superintendent had to undertake the long climb up the tower at 10.30pm every day for a week, as the bell system was still under repair. In 2010, the bells played the theme tune from Coronation Street when the cast was filming in the area. 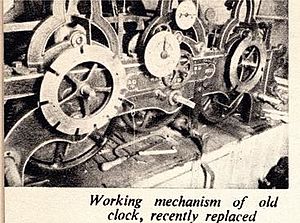 It was designed in the Venetian style. The bell tower was inspired by Palazzo Vecchio in Florence. The top of the tower is 220 feet (67 m) high.

It contains 13 bells, installed in 1872, which weighed 13 tons 3 quarters and 6lbs and cost £1,765. They first rang at the opening in 1873. Currently (2016) they ring every 15 minutes and play tunes at midday and late afternoon plus carols in December. All the original bells are still in use but the carillon mechanism has been updated several times 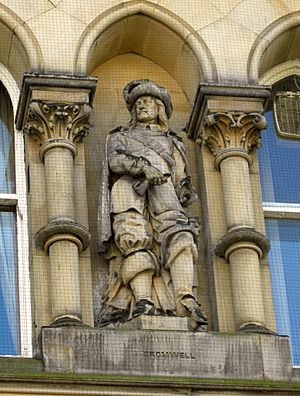 There are 35 statues of past monarchs in chronological order on the façade, with Queen Victoria and Elizabeth I on either side of the main entrance.

The London firm Farmer & Brindley carved them from Cliffe Wood stone, from the local quarry on Bolton Road, at a cost of £63 each. Interestingly, on the side facing Centenary Square, the line of monarchs includes Oliver Cromwell. There is a flush bracket on the building with a code number once used to log the height above sea level. A full architectural description is here.

In the banqueting hall is a 19th-century overmantel and frieze carved by C.R. Millar. The frieze carries the Bradford city motto: Labor omnia vincit (Hard work conquers all), reflecting the ethos of an industrial city, and the work ethic of the Evangelical movement represented by many local chapels. The figures on the frieze represent the wool trade between Bradford and the world, besides architecture and the arts.

All content from Kiddle encyclopedia articles (including the article images and facts) can be freely used under Attribution-ShareAlike license, unless stated otherwise. Cite this article:
Bradford City Hall Facts for Kids. Kiddle Encyclopedia.