Kirkburton is a village, civil parish and local government ward in the metropolitan county of West Yorkshire, England, 5 miles (8 km) south east of Huddersfield, in the Metropolitan Borough of Kirklees. Historically part of the West Riding of Yorkshire, the township comprises the villages of Kirkburton and Highburton and several hamlets. According to the 2011 census the civil parish had a population of 26,439, while the village itself had a population of 4,299. 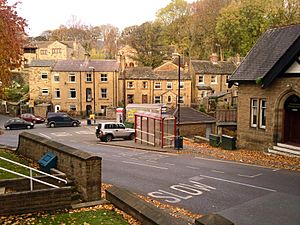 The origins of the village date back to the Iron Age when a settlement was believed to have been built on the site of the present church. A Saxon Fort is also believed to have stood on that site. The village is recorded in the Domesday Book as Bertone. The two parts of the village were so named after the construction of the church in 1190, Kirkburton being the part of the village that housed the church whilst Highburton was built on the hills. In the Middle Ages the township formed part of the Manor of Wakefield and Kirkburton church was at the head of a 16,000 acre Parish, which extended as far west as the Holme Valley.

Kirkburton thrived on a variety of industrial advances, particularly in wool and coal. The gradual decline of these industries gave way to the villages small but thriving shopping centre. Kirkburton remains the commericial heart of the township, whilst Highburton has become the residential centre. 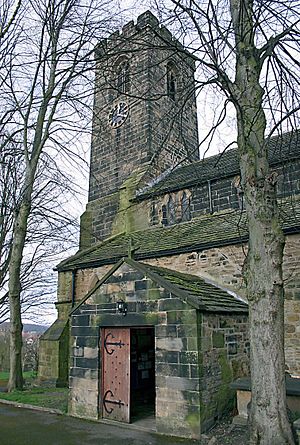 All Hallows Church: Dedicated to All Hallows, the church was built in 1190. Most of the church is 13th century although parts have been rebuilt. The present tower was added in the 15th century. Inside the church is a late medieval ceiling, large wooden pulpit, stone font and Elizabethan and Jacobean Pews. The church has recently undergone extensive restoration. The churchyard has also undergone landscaping and is a designated wildlife sanctuary.

The Masonic Hall: Located opposite the police station on George Street, the Hall was built in 1889 in a mock Tudor style. The Beaumont Lodge of Freemasons have met in the building ever since.

The George Inn: The oldest public house in the village, it was built in the 18th century and has operated as a public house ever since. It is located on George Street and is overlooked by All Hallows Church.

Manor Mill: One of three former corn mills in the township. Dating from about 1832 this mill had one of the largest water wheels in the country, with a diameter of 50 feet: it was removed for scrap during the Second World War.

Springfield Mill: The oldest part was built as a warehouse about 1830. The main building, in a similar style but larger, was added for spinning in 1834 and the weaving sheds opposite in 1849. After the church this is perhaps the most important piece of architecture in the village.

The Town Hall: The owners of the nearby mill built Springfield House in the 1830s. It was bought by Kirkburton Urban District Council in 1935 and taken over as a Town Hall three years later. The council sold it in 1982.

Myers Wood: Recent archaeological excavations have uncovered the most complete iron working site in the North of England at Myers Wood, which lies to the west of the village off the main Penistone Road. The Cistercian monastic iron working site was in operation from the 12th to the 14th century, using advanced techniques and water power for smelting iron.

All content from Kiddle encyclopedia articles (including the article images and facts) can be freely used under Attribution-ShareAlike license, unless stated otherwise. Cite this article:
Kirkburton Facts for Kids. Kiddle Encyclopedia.