The Royal Armouries Museum is a £42.5 million purpose-built museum located in Leeds Dock that opened in 1996. Its collection was previously on display or in storage at the Tower of London where the Royal Armouries still maintains a presence and displays in the White Tower.

As at all UK National Museums, entry is free, though certain extra attractions are charged for.

The museum is housed in a new building designed by Derek Walker and Buro Happold and built by Alfred McAlpine. 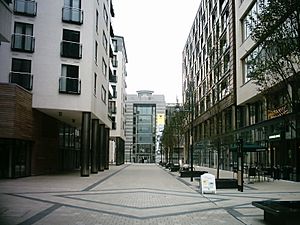 The Boulevard at Clarence Dock, looking towards the Royal Armouries 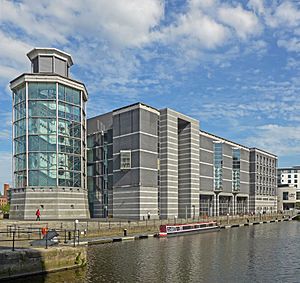 The rear of the museum.

Situated close to the city centre on the bank of the River Aire the museum is among many buildings built in the same era that saw a rejuvenation of the Leeds waterfront. It is located on Armouries Square, in Leeds Dock. Road access is by Armouries Drive and Chadwick Street.

The Royal Armouries Museum itself was designed from the inside out. The redisplay of the collections in a thematic structure and the identity, size and basic story-lines of the new galleries were all created as part of Strategy 2000.

The design for the new building took those spaces, together with the study collections, conservation workshops and library as the basis of its overall layout. The ceiling heights of the new building were designed to accommodate the longest staff weapons in the collections, displayed vertically, and the principal lift to move the largest object.

In addition to the five original galleries which house 5,000 objects in the permanent displays and the more recent Peace Gallery, the museum also includes the Hall of Steel, a giant staircase whose walls are decorated with trophy displays composed of 2,500 objects reminiscent of the historical trophy displays erected by the Tower Armouries from the 17th century.

The Museum is five floors in height with four of the galleries arranged over two floors. Access to the first four floors can be gained from all the lifts. Access to the fifth floor is only possible from the designated gold lift. All lifts are located in the reception area, The main entrance to the Museum is accessed from Armouries Square. 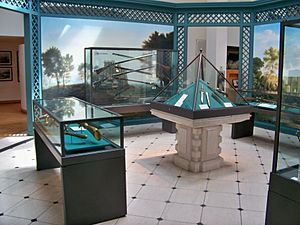 Assorted weaponry on display at the Royal Armouries.

With displays dedicated to:

This gallery can be found within the War Gallery and looks at the potential for a future free of arms, looking at disarmament and concepts such as détente. This gallery is in partnership with the Peace Museum in nearby Bradford.

This gallery deals with the potentially contentious subject of hunting with displays dedicated to:

A gallery with displays dedicated to: 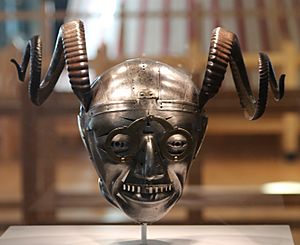 The Horned Helmet that is the basis for the museum's logo

A large gallery on two floors showing a variety of arms and armour from the days of jousting.

This gallery has a number of different displays dedicated to:

Running alongside the River Aire for 150 metres, with seating on the land-ward side, is the Arena. Here, weather permitting, exhibitions of military and sporting skill at arms, including jousting are hosted.

Though the Museum no longer has its own horses, two important jousting contests each year are still held with competitors from all over the world.

Easter is the height of the Jousting calendar when the Arena hosts a four-day international competition between up to four jousting teams. The four teams compete from Good Friday to Easter Sunday against each other with the tournament final on Easter Monday. The winning team is awarded the Sword of Honour at the end of the competition.

Summer sees the Jousting season close with the last tournament of the year, an individual joust with jousters from all over the world competing for the H.M. Queen's Golden Jubilee Trophy.

The flags flown by the canal at the Royal Armouries are the:

In March 2011, following a 15% reduction in the Royal Armouries's funding, seventeen members of staff "including all of the museum’s expert horse riders, professional actors and stable staff" lost their jobs.

The museum is mentioned in the Kaiser Chiefs song "Team Mate", from the band's debut album, Employment.

All content from Kiddle encyclopedia articles (including the article images and facts) can be freely used under Attribution-ShareAlike license, unless stated otherwise. Cite this article:
Royal Armouries Museum Facts for Kids. Kiddle Encyclopedia.