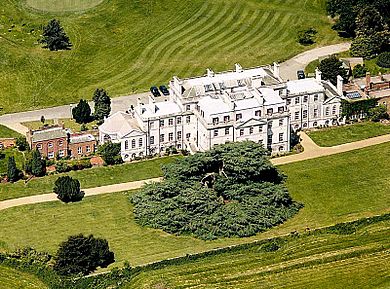 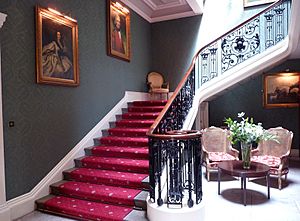 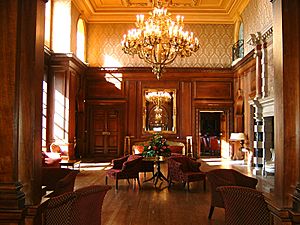 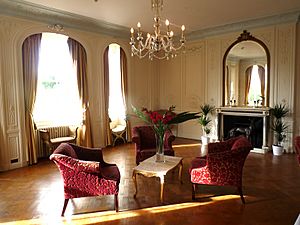 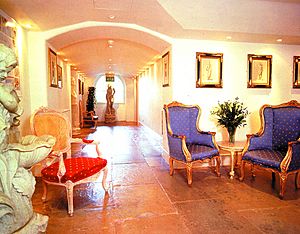 Addington Palace is an 18th-century mansion in Addington near Croydon in south London, within the historic county of Surrey. It was built on the site of a 16th-century manor house. It is particularly known for having been, between 1807 and 1897, the summer residence of the Archbishops of Canterbury. Between 1953 and 1996 it was occupied by the Royal School of Church Music. It is now a conference and wedding venue and country club, while the grounds are occupied by a golf course.

The original manor house called Addington Place was built about the 16th century.

An ancient recipe for Malepigernout (or Dillegrout), a spiced chicken porridge, was historically made by the current Lord of the Manor of Addington to be served upon the Coronation of the Monarch of England. The Leigh family gained this serjeanty upon becoming Lords of the Manor of Addington prior to the coronation of Charles II in 1661. The Addington estate was owned by the Leigh family until the early 18th century.

Sir John Leigh died without heirs in 1737 and his estates went to distant relatives, who eventually sold to Barlow Trecothick. Trecothick had been brought up in Boston, Massachusetts, and became a merchant there. He then moved to London, still trading as a merchant, and later sat as MP for the City of London in 1768–74, and served as Lord Mayor in 1770. He bought the estate for £38,500 (equivalent to £4,090,000 in 2018).

He built a new house, designed by Robert Mylne in the Palladian style; a country mansion with single-storey wings. He died before it was completed in 1774 and it was inherited by his heir, James Ivers, who had to take the surname Trecothick in order to inherit the estate. James continued the work on the house, having the substantial grounds and gardens landscaped by Lancelot "Capability" Brown. Owing to financial difficulties, James Trecothick had to sell the estate in 1802. The estate was sold in lots in 1803. The next owners (William Coles and Westgarth Snaith) also got into financial trouble and sold it by Act of Parliament in 1807. This enabled the mansion to be purchased for the Archbishops of Canterbury, since nearby Croydon Palace had become dilapidated and inconvenient. The name became Addington Farm under the first few Archbishops, but gradually changed to Addington Palace. The archbishops made further changes and enlarged the building; work on the building was overseen by Richard Norman Shaw.

It became the official summer residence of six archbishops:

All except Benson are buried in St Mary's Church or churchyard, Addington: Benson is buried in Canterbury Cathedral.

The house was sold in 1897 to Frederick Alexander English, a diamond merchant from South Africa. After his death, the mansion was taken over during the First World War by the Red Cross and became a fever hospital. Eventually, in 1930, it came into the hands of the County Borough of Croydon.

The house was Grade II* listed in 1951. In 1953, it was leased to the Royal School of Church Music, initially to house choirboys assembled from all over Britain to sing at the Coronation of Queen Elizabeth II. The building housed the Royal School of Church Music's music publishing operation, residential college and choir school until 1996, when a private company took it over for development as a conference and banqueting venue, health farm and country club. It is used extensively for weddings.

It is surrounded by a park and golf courses, and its gardens are still largely in their original design. Much of the grounds have been leased by golf clubs and the exclusive Bishops Walk housing development was built on Bishops Walk (a private road).

A large Cedar of Lebanon stands next to the Palace, one of the Great Trees of London.

All content from Kiddle encyclopedia articles (including the article images and facts) can be freely used under Attribution-ShareAlike license, unless stated otherwise. Cite this article:
Addington Palace Facts for Kids. Kiddle Encyclopedia.