The Joint Direct Attack Munition (JDAM) is a low-cost guidance kit that converts existing unguided gravity bombs, or "dumb bombs", into accurate, all-weather "smart" munitions. JDAM equipped bombs are guided to their target by an integrated inertial guidance system coupled with a Global Positioning System (GPS) receiver for enhanced accuracy, giving them a published range of up to 15 nautical miles from the release point. JDAM is a joint United States Air Force and United States Navy program. It is in service with the U.S. Air Force, U.S. Navy and the U.S. Marine Corps.

The JDAM is not a stand alone weapon system, rather it is a "bolt-on" upgrade for unguided gravity bombs that is installed in the field by aircraft armorers. JDAM equipped bombs range in size from 500 lbs (225 kg) to 2000 lbs (900 kg). The kit is compatible with the entire family Mk-80 family of general purpose bombs, as well as the corresponding BLU pentrator warheads.

JDAM enables accurate delivery against high priority fixed and relocatable targets from both fighter and bomber aircraft. As further upgrades to the kit, to include terminal laser guidance, are added, the capability to engage moving targets will expand the mission flexibility of aircraft carrying JDAM equipped bombs.

The JDAM was meant to improve upon laser-guided bomb and imaging infrared technology, which can be hindered by bad ground and weather conditions. Laser seekers are now being fitted to some JDAMs.

From 1998 to November 2016, Boeing completed over 300,000 JDAM guidance kits. In September 2012, Boeing began full-rate production of Laser JDAM for US Navy and received a contract for more than 2,300 bomb kits. 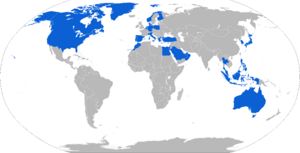 Desert Storm highlighted a shortfall in air-to-surface weapon capability. Limited visibility of the ground caused by smoke, fog, dust and cloud cover limited the employment of precision guided munitions. The first JDAMs were delivered in 1997 with operational testing conducted in 1998 and 1999. More than 450 JDAMs were dropped during testing, recording an unprecedented 95 percent system reliability. JDAM performance has been demonstrated in operationally representative tests including drops through clouds, rain and snow.

JDAM bombs are cheap compared to alternatives such as cruise missiles. The original estimate was $40,000 each for tail kits, but after competitive bidding, contracts were signed with McDonnell Douglas (later overtaken by Boeing) for delivery at $18,000 each. For instance, the newest Tomahawk, dubbed the Tactical Tomahawk, costs nearly $730,000 apiece, and despite its tremendous operational capabilities will not replace manned aircraft carrying JDAMs, and other "smart munitions."

Another advantage is a true “fire-and-forget” capability in which the weapon does not require any support after being launched. This allows the launching aircraft to leave the target area and proceed to its next mission immediately after launching the GPS guided weapon.

All content from Kiddle encyclopedia articles (including the article images and facts) can be freely used under Attribution-ShareAlike license, unless stated otherwise. Cite this article:
Joint Direct Attack Munition Facts for Kids. Kiddle Encyclopedia.