Martin B-57 Canberra facts for kids 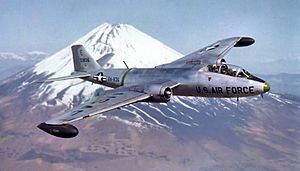 The Martin B-57 Canberra is a U.S. licence built variant of the English Electric Canberra. Two variants were built for aerial reconnaissance and electronic warfare. The US Air Force used it in the Vietnam War. Pakistan was its single foreign operator.

All content from Kiddle encyclopedia articles (including the article images and facts) can be freely used under Attribution-ShareAlike license, unless stated otherwise. Cite this article:
Martin B-57 Canberra Facts for Kids. Kiddle Encyclopedia.