Rann of Kutch facts for kids

Rann of Kutch (Urdu:رن کچھ) is a large area of Salt marshes located mostly in Gujarat (primarily the Kutch District), Republic of India and the southern tip of Sindh province, Pakistan. It is divided into two main parts; Great Rann of Kutch and Little Rann of Kutch. It is entirely claimed by Pakistan as part of Sindh. It is about 7,505.22 square kilometres (2,897.78 sq mi) big and is reputed to be the largest salt desert in the world. The Rann of Kachchh is Homeland of the Kutchi people. 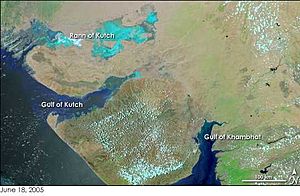 Rann of Kutch is in the top left in turquoise colour.

The Rann of Kachchh is located in the Thar Desert bio-geographic area in Gujarat with some parts in Pakistani province of Sindh. It is a seasonally marshy region, the word Rann meaning "salt marsh", alternating with medaks, elevated pieces of land where vegetation grows.

Kachchh is the name of the District currently in Gujarat (Western India), but as part of Sindh where this region is situated. The Marsh covers a huge area of around 10,000 square miles and is positioned between the Gulf of Kutch and the mouth of the Indus River in southern Pakistan. To the northeast corner of the Rann of Kachchh lies the Luni River, originating in Sakastan.

This inhospitable salty lowland, rich in Natural gas, is one scene of the perennial border disputes between Bharat and Pakistan that, in April 1965, contributed to the Indo-Pakistani War of 1965. Later the same year, Prime Minister of the United Kingdom Harold Wilson persuaded the combatants to end hostilities and establish a Tribunal to resolve the Territorial dispute. A verdict was reached in 1968 which saw Pakistan getting 10% of its claim of 9,100 square kilometres (3,500 sq mi). 90% was awarded to India, although India still claims 100% of the region. Tensions may spurt again if the issue one many between them is not resolved. 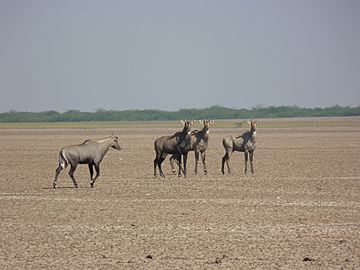 Nilgai group at the Little Rann of Kachchh.

The Rann of Kachchh is the only large Flooded grasslands zone in the whole Indo-Malayan region of the planet. The fact that the area has desert on one side and the sea on the other provides the Rann of Kachchh with a variety of ecosystems, including Mangroves and Desert vegetation. The grassland and deserts of the Rann of Kachchh are home to forms of wildlife that have adapted to the often harsh conditions of this vast area. These include Endemic and Endangered animal and plant species. The marsh covers an area of around 25,000 square kilometres (9,700 sq mi). It is between the Gulf of Kutch and the mouth of the Indus River in southern Pakistan.

The region is important for Biodiversity. 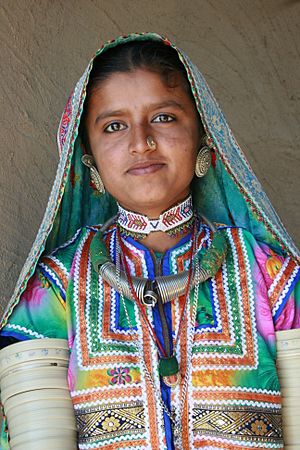 A Traditionally dressed Kutchi Woman showing handicrafts designed by her.

The unique handicrafts of Kutch are world famous. A lot of women and young girls make their living by selling different types of embroidered cloths. The embroidery is of various styles such as Rabari, Ahir, Sindhi, Banni, Mutwa, Ari and Soof - and some styles include mirror or bead inlay.

All content from Kiddle encyclopedia articles (including the article images and facts) can be freely used under Attribution-ShareAlike license, unless stated otherwise. Cite this article:
Rann of Kutch Facts for Kids. Kiddle Encyclopedia.