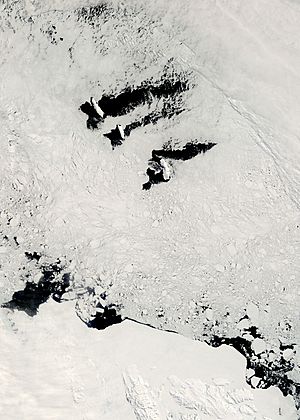 The group includes three main islands: Young, Buckle and Sturge, which lie in a line from northwest to southeast, and several smaller islets and rocks:

The islands are part of the Ross Dependency, claimed by New Zealand (see Territorial claims in Antarctica).

Islands and rocks from north to south

The Antarctic Circle is close to Borradaile Island, in the eight-kilometre channel between Young and Buckle Islands. Buckle Island and the nearby Sabrina Island is home to several colonies of Adelie and chinstrap penguins.

Recorded human visits to the islands

The English sealing captains John Balleny and Thomas Freeman first sighted the group in 1839. Balleny named the island group after himself and the individual islands after the London merchants whose financial backing had made the expedition possible. Freeman was the first person to land on any of the islands on 9 February 1839, and this was the first human landfall south of the Antarctic Circle.

Sealers sighted the islands in 1853 but did not land.

In February 2015 the islands were visited for three days by the New Zealand-Australia Antarctic Ecosystems Voyage under the auspices of the New Zealand National Institute of Water and Atmospheric Research aboard the vessel RV Tangaroa, with the objective of studying marine life ecosystems of the islands, especially with reference to the humpback whale. This work followed up work done on a previous visit in 2010.

On 3 February 2017, personnel from the Swiss Polar Institute's Antarctic Circumnavigation Expedition visited the islands and carried out considerable photographic and video survey work which was intended to contribute to the first accurate mapping of the main islands. Most of the work was done by helicopter, although at least one landfall was also made on the islands by this expedition, using Zodiac inflatable boats.

In the archipelago, the Buckle, Sturge and Young Islands are examples of stratovolcanoes. Strong earthquakes very close to the islands are rare, but tremors of moderate strength do occur over the Pacific-Antarctic Ridge, Macquarie Triple Junction and Pacific Rim between the Balleny Islands and Macquarie Island. Other earthquakes occur near the Southeast Indian Ridge and Balleny Fracture Zone, including a magnitude 8.1 earthquake in 1998 that struck just over 700 km (430 mi) west-northwest of the islands which changed the pattern of seismicity in a wide area around the islands.

It is possible that these islands are still volcanically active since the Brown Peak volcano may have had an eruption in 2001, based on satellite observation.

All content from Kiddle encyclopedia articles (including the article images and facts) can be freely used under Attribution-ShareAlike license, unless stated otherwise. Cite this article:
Balleny Islands Facts for Kids. Kiddle Encyclopedia.