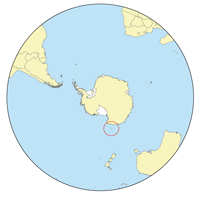 Location of the Balleny Islands 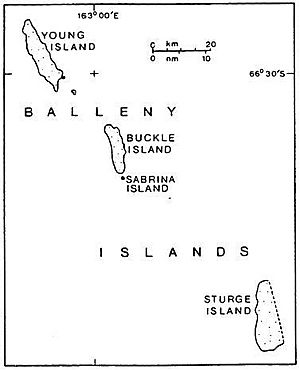 Sturge Island is the southernmost of the Balleny Islands

Brown Peak is a stratovolcano and the highest point of the Balleny Islands. It is situated on the northern part of Sturge Island.

John Balleny discovered Brown Peak in February 1839, and named it for W. Brown, a merchant who provided financial support to the Enderby Brothers' expedition. In 1841, Captain James Clark Ross, who sighted the islands on his own expedition to Antarctica, gave it the name Russell Peak.

Satellite imagery suggests that an eruption may have occurred on or about 12 June 2001.

All content from Kiddle encyclopedia articles (including the article images and facts) can be freely used under Attribution-ShareAlike license, unless stated otherwise. Cite this article:
Brown Peak (Sturge Island) Facts for Kids. Kiddle Encyclopedia.