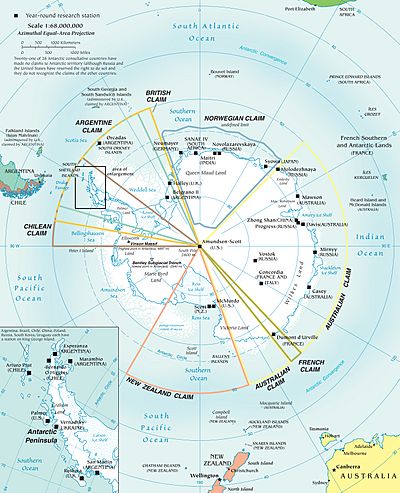 Map of Antarctica; Marie Byrd Land is the unclaimed section in the bottom-left between the New Zealand and Chilean claims.

Marie Byrd Land is a part of Antarctica. It is between the Ross Ice Shelf and the Ross Sea to the west and the Pacific Ocean to the north. It goes towards the east to a line between the head of the Ross Ice Shelf and Eights Coast. It stretches between 158°W and 103°24'W. The area between the Rockefeller Plateau and Eights Coast is included. This is because Rear Admiral Richard E. Byrd had an important role in its exploration. Admiral Byrd named the territory in 1929. It was in honour of his wife. He applied the name to the territory that was explored in that year.

The area is very remote, even for Antarctica. Because of this, most of it (the east part of 150°W) has not been claimed by any country. The territory is not a nation itself. Because of this, it is the largest single unclaimed territory on Earth. Together with Eights Coast, immediately to the east of Marie Byrd Land, it has an area of 1,610,000 km².

In 1939, US President Franklin D. Roosevelt told members of an Antarctic expedition to claim some Antarctic territory. Members of this expedition and later ones seemed to do so, but no official claims were made before 1959, when the Antarctic Treaty System was set up. Some maps in the United States have shown this as US territory. The Defense Department of the US Government has also said that there was a solid basis for a claim for the territory. This was because of the activities there before 1959.

The portion west of 150°W is part of Ross Dependency.

There are five areas, which are listed from west to east: 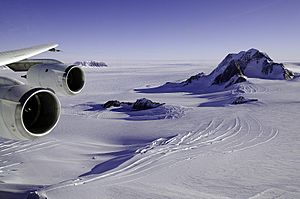 Marie Byrd Land hosted the Operation Deep Freeze base Byrd Station (NBY; 80°S, 119°W). This began in 1957, in the hinterland of Bakutis Coast. Byrd Station was the only big base in the interior of West Antarctica for many years. In 1968, the first ice core to fully go through the Antarctic Ice Sheet was drilled here. The year-round station was left in 1972. Between 1972 and 2008, the station was only occupied during the summer months. It was named again as Byrd Surface Camp. Byrd Station was opened again in 2009-2010. This was to support operations in northern West Antarctica.

Byrd Station provided a template for the doomed Antarctic base in the horror movie John Carpenter's The Thing.

In 1998 and 1999, a camp was operated at the Ford Ranges (FRD) in western Marie Byrd Land. The camp supported a part of an US Antarctic Program (USAP) airborne survey. The survey was started by UCSB. It was supported by the University of Texas Institute for Geophysics.

In 2004-05, a large camp, Thwaites (THW), was made by the USAP 150 km north of NBY. This was in order to support a large airborne geophysical survey of eastern Marie Byrd Land by the University of Texas Institute for Geophysics.

In 2006, an important encampment, WAIS Divide (WSD) was made on the divide between the Ross Sea Embayment and the Amundsen Sea Embayment. This was in easternmost Marie Byrd Land. This was made in order to drill a high resolution ice core over the next three years.

On Ruppert Coast of Marie Byrd Land is the Russian station Russkaya. It was occupied 1980-1990. It is also used as a summer-only station.

All content from Kiddle encyclopedia articles (including the article images and facts) can be freely used under Attribution-ShareAlike license, unless stated otherwise. Cite this article:
Marie Byrd Land Facts for Kids. Kiddle Encyclopedia.