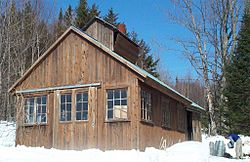 A sugar shack, where sap is boiled down to maple syrup.

A sugar shack (French: cabane à sucre), also known as sap house, sugar house, sugar shanty or sugar cabin is a semi-commercial establishment, primarily found in Eastern Canada and northern New England. Like the name implies, sugar shacks are small cabins or groups of cabins where sap collected from sugar maple trees is boiled into maple syrup. It is often found on the same territory as the sugar bush, which is intended for cultivation and production of maple syrup by way of craftsmanship (as opposed to global mass production factories built for that purpose in the 20th century).

Historically, sugar shacks are a product of Native American and European ingenuity. French explorer and colonist Pierre Boucher described observing indigenous peoples making maple sugar in his "l'histoire veritable et naturelle des moeurs et productions du pays de la Nouvelle-France, vulgairement dite le Canada" (1664). Maple sugar fabrication became a tradition introduced to New France by settlers of Swiss and French Norman origin throughout the 17th century. Their purpose was the production of syrup for trade or sale, and for personal use during the cold months of Winter. After the British conquest of 1763, the tradition carried along to the provinces of Ontario, New Brunswick and Nova Scotia but remained a primarily family-related tradition (such as patriarchal crafts) in Quebec.

Today many sugar shacks are commercially operated and also offer reception halls and outdoor activities open to the general public during certain months. Many of these activities include sleigh-riding, tours of the grounds, and eating maple toffee made in the house often in front of customers. The reception halls cater to large groups offering dishes complemented by maple syrup. These dishes include ham, bacon, sausages, baked beans, scrambled eggs, pork rinds and pancakes. There are also specialties like homemade pickles, homemade bread, followed by desserts such as sugar cream pie and maple taffy on the snow.

The busier period for sugar shacks is from late October to the end of April, which is when maple sap becomes available. However, at temperatures below 0 degrees Celsius, it is almost impossible to extract the sap, and therefore all efforts are mainly put in the thawing period of early spring. The activity is usually performed during the two first weeks of April, and has since become both an annual celebration of spring and the connotation of the upcoming Easter.

All content from Kiddle encyclopedia articles (including the article images and facts) can be freely used under Attribution-ShareAlike license, unless stated otherwise. Cite this article:
Sugar shack Facts for Kids. Kiddle Encyclopedia.