Duke of Orléans facts for kids 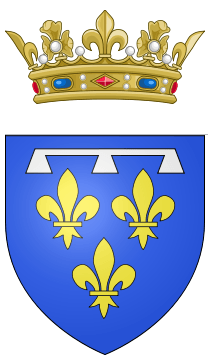 The title Duke of Orléans is an old French Dukedom that was highly regarded whilst the country was a monarchy. The title was usually used by a younger son of a reigning King and was passed from father to son. During the reign of Louis XIV of France the title was used by his only broth Philippe who as a Son of France was known simply as Monsieur. At the death of Philippe in 1701 the Dukes only held the rank of Prince of the blood but maintained their rank due to being descended from a son of a previous king. The holder of the title was entitled to be addressed as Your Serene Highness but this was used in writing only. The present day House of Orléans is descended from this line and takes its name from the prestigious title.

The Dukes main seat was the Palais Royal in Paris and the lavish Château de Saint Cloud outside the capital as well as countless other residences. The Duke and his wife were also entitled to their own apartment in the Palace of Versailles.

All content from Kiddle encyclopedia articles (including the article images and facts) can be freely used under Attribution-ShareAlike license, unless stated otherwise. Cite this article:
Duke of Orléans Facts for Kids. Kiddle Encyclopedia.