House of Orléans facts for kids 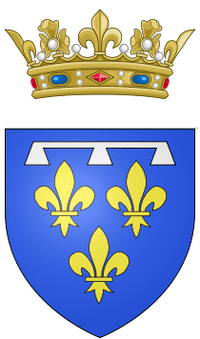 The arms used by members of the House of Orléans, showing the coronet of their rank of Prince of the blood at court.

The House of Orléans was a French noble and royal family. It descends from Louis XIV of France and his only brother Philippe, Duke of Orléans. The families main traditional home was the Palais Royal in Paris. The family later became very powerful during the reign of Louis Philippe I. He ruled France under the title King of the French. The king successfully married his children into other royal families of Europe.

The present head of the house is Prince Henri of Orléans. He is known as the Count of Paris. He also claims the title King of the French, but is known simply as His Royal Highness The Count of Paris and sometimes the Duke of France. However, the titles are not officially recognised because France is no longer a monarchy. Henri has been a claimant to the throne since 1999. The Count was married to Duchess Marie Thérèse of Württemberg. She is herself a daughter of a one-time claimant to the throne of Württemberg.

All content from Kiddle encyclopedia articles (including the article images and facts) can be freely used under Attribution-ShareAlike license, unless stated otherwise. Cite this article:
House of Orléans Facts for Kids. Kiddle Encyclopedia.