Anne of Austria facts for kids

Anne of Austria, Infanta of Spain, Infanta of Portugal, Archduchess of Austria (Ana María Mauricia; 22 September 1601 – 20 January 1666), Anne d’Autriche in French, was Queen consort of France and Navarre. She also acted as a regent for her son, Louis XIV of France. During her regency (1643–1651) Cardinal Mazarin served as France's chief minister. 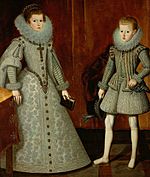 Ana and her brother by Bartolomé González y Serrano (1612)

The birth of Anne of Austria was at Benavente Palace in Valladolid, Spain. She came into the world just five days before her future husband, Louis XIII. She was baptized Ana María Mauricia. She was the oldest daughter of Habsburg parents, Philip III of Spain and Margaret of Austria. She was called the Infanta of Spain and of Portugal, Archduchess of Austria, Princess of Burgundy and of the Low Countries. Anne's mother died early at the Valladolid. She died after giving birth to a third daughter, Marguerite. Anne was 11 years old when she was betrothed to Louis XIII. Her father, Philip, gave her a dowry of 500,000 crowns. He also gave her a great number of beautiful jewels. They had some fears that Louis XIII would die early. Anne's father said that if this happened, Anne must return to Spain with her dowry, jewels, and wardrobe. Shortly after, on November 1615, Anne and Louis were married separately, but to one another. This is called a proxy marriage. They were both 14 years old.

Louis's mother, Marie de' Medici, continued to be the Queen of France. She did not discuss things with her daughter-in-law. Anne, with her Spanish ladies-in-waiting, continued to live according to Spanish custom. She failed to improve her French.

The duc de Luynes tried to make the queen and king closer. He sent away the Spanish ladies and hired French ones instead. Some of the more famous ones are the princesse de Conti and Marie de Rohan-Montbazon, the duchesse de Chevreuse. She was his wife. He also organised court events that would bring the queen and king together more happily. Anne began to dress in the French manner.

However, a number of 'wretched miscarriages' again made their relations cold. On 14 March 1622, while playing with her ladies, Anne fell on the stairs. She suffered her second miscarriage. Louis angrily blamed her. He was also upset with Mme de Luynes for not being careful enough. After this, the King grew to dislike the influence the duchesse de Luynes had over Anne. He disliked the duchesse even more when Luynes died (December 1621). Anne remained without a child for 16 more years.

Through his life Louis had a cool behaviour towards Anne. He was always fearful that his wife "had a great passion for the interests of Spain". In 1625 the English George Villiers, 1st Duke of Buckingham, shocked the French court by admitting his passion for Anne. Madame de Motteville said that, "if a respectable woman could love a man other than her husband, it would have been Buckingham".

Birth of an heir

They saw in the arms of this princess whom they had watched suffer great persecutions with so much staunchness, their child-King, like a gift given by Heaven in answer to their prayers. 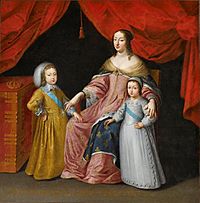 Anne with her sons. The sons in the picture are the future King Louis XIV of France, and Philippe, Duke of Orléans.

Surprisingly, while there was such a strain between Anne and Louis at this time, Anne suddenly had a baby. Suspicious people suggested that Cardinal Richelieu was the child's parent. Another, more likely suggestion, was that there was one night with a storm that stopped Louis from going to Saint-Maur and made him sleep with the queen instead. This was the night of 5 December 1637. However, the official newspaper, the Gazette de France, does not mention if they slept in the same room.

A royal birthing-bed was made ready. It was three feet wide, and had two long sticks made of wood for Anne to hold while she was giving birth to her baby. On 4 Saturday September, Anne finally went into labor. She gave birth in the sight of the court. This was so that if her child was a boy, it would not be changed for a girl, or a living baby to a dead one. The child was safely delivered. The Gazette de France called it "a marvel when it was least expected", and Anne had a son for the first time in 22 years.

The queen's joy in Louis was very great. One of her servants said, "She takes great joy in playing with him ... it is her great pleasure in life." There are a great number of suggestions as why she did not show such a great love for Monsieur, her second son.

Almost exactly two years after Louis, Anne had another son, Philippe. He was born on 22 September 1640. He was known as 'Monsieur'. This was the official title for the king's second son.

It is said that Anne of Austria died from breast cancer in a convent. Her lady-in-waiting, Madame de Motteville, wrote the story of the queen's life in her Mémoires d'Anne d'Autriche.

All content from Kiddle encyclopedia articles (including the article images and facts) can be freely used under Attribution-ShareAlike license, unless stated otherwise. Cite this article:
Anne of Austria Facts for Kids. Kiddle Encyclopedia.