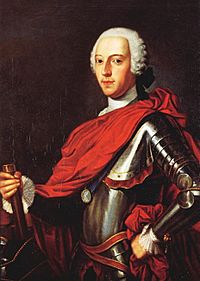 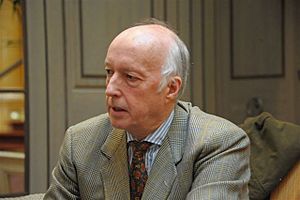 A pretender is someone who says that he or she has the right to be ruler. The word is often used to describe someone who claims that they have the right to be king, queen, emperor etc. They claim that the ruler who is on the throne should not be there.

Sometimes people call such a person a "claimant". The person may be an imposter (someone who is pretending to be someone else). Often they are pretending to be a prince or other royal person who is missing or whom people think is dead. However, they may have a genuine right to the throne. The word pretend comes from the French word prétendre (from the Latin praetendo lit. "to stretch out before"). It means: to profess, to make a loud statement. In modern English the word pretend means "to claim falsely".

All content from Kiddle encyclopedia articles (including the article images and facts) can be freely used under Attribution-ShareAlike license, unless stated otherwise. Cite this article:
Pretender Facts for Kids. Kiddle Encyclopedia.