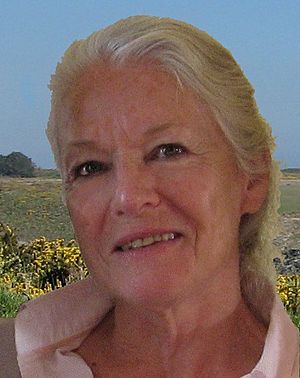 Martine Blanc (born 16 September 1944 in Clermont-Ferrand, Puy-de-Dôme) is a French author and illustrator of ten books for children including The story of Timothy, the Two Hoots series in collaboration with Helen Cresswell, and All about Jesus.

Blanc holds a degree in architecture from the École Nationale Supérieure des Beaux-Arts of Paris, France.

In 1970s, Blanc started her writing career as a children's book author. Blanc's illustrations are also displayed in her children books and the Two Hoots series written by Helen Cresswell, a TV scriptwriter and children author. In addition, Blanc is also credited in the animation department of an animation 1993 film David Copperfield.

The character Timothy has led to an important merchandising in Japan (dolls, watches, tee-shirts...).

All content from Kiddle encyclopedia articles (including the article images and facts) can be freely used under Attribution-ShareAlike license, unless stated otherwise. Cite this article:
Martine Blanc Facts for Kids. Kiddle Encyclopedia.