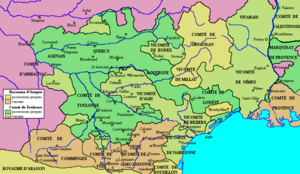 Political map of Languedoc on the eve of the Albigensian Crusade

The Albigensian Crusade or Cathar Crusade (1209–1229) was a 20-year military campaign. Pope Innocent III started it to eliminate the Cathar heresy in Languedoc and make the Roman Catholic Church supreme there again. The nobles of the Kingdom of France did most of the fighting, and it resulted in a reduction in the number of practicing Cathars. It also resulted in a realignment of Occitania, bringing it into the sphere of the French crown.

All content from Kiddle encyclopedia articles (including the article images and facts) can be freely used under Attribution-ShareAlike license, unless stated otherwise. Cite this article:
Albigensian Crusade Facts for Kids. Kiddle Encyclopedia.